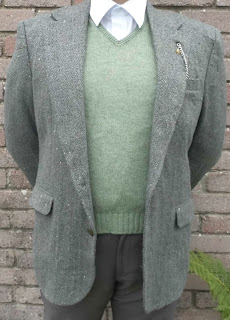 From time to time I am asked about the things I wear (honest). Granted, more often the question is directed at me, “What are you wearing?” but never the less I am asked, and seeing as blog posts devoted to people’s wardrobes are popular I thought I would have a go myself… First up, the “Quincy Combo”. But what is the “Quincy Combo”? Well, I’m a big a fan of the television series, Quincy, M.E. I have a vague memory of it in my early years, I was an avid fan of it during my Art College days and I regularly watch the dvd’s today. Anyone watching the end credits will notice, “Mr. Klugman's Wardrobe Furnished by Botany 500”. Botany 500 was a brand name owned by the Botany 500 Group of New York. H. Daroff and Sons manufactured their men’s suits and sport coats in Philadelphia, Pennsylvania and they provided the wardrobe for many television programs. Universal was no exception Botany 500 Furnished the Wardrobe of Telly Savalas on Kojak, and Jack Klugman on Quincy, M.E. I like wearing tweed jackets, this is a Botany 500 jacket. Having furnished Jack Klugman’s wardrobe for most of the series Botany 500’s name disappeared from the credits of series six, this time reading, “Mr. Klugman's Wardrobe Furnished by McGregor Sportswear” (Botany 500 returned for the last two series). Once described as the leading American men’s sportswear manufacturer McGregor Sportswear had been producing quality casual clothing since 1921(originally trading as David D. Doniger & Company). This is a McGregor Sportswear Tank Top (or “sweater vest”) having always been a fan of the tank top I always wear one when a waistcoat is deemed too ‘formal’ or it’s not cold enough for a cardigan. I like to combine a jacket with a tank top and so naturally I would only want to wear the very finest, and endorsed by the Los Angeles Coroner’s Office’s very best! 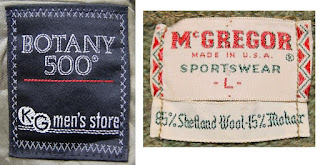 © Arfon Jones 2013. All images are copyrighted throughout the world.
Posted by Arfon Jones at 3:25 pm