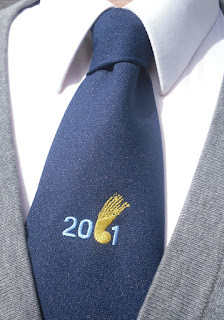 Following on from my mission to revisit previous blog posts from the past ten years we return to April 18th 2013 when I uploaded a post devoted to the history of the now defunct Halley's Comet Society ofLondon and how it had all came about after I had noticed Sir Patrick Moore wearing a blue Halley's Comet Society tie with the society’s '1986' logo embroidered on it in an episode of the Sky at Night from 1982. This society fascinated me and as there was very little about it online I made it my mission to correct this, resulting in a fairly comprehensive post (confirmed by numerous people who have reached out to me since uploading it) and I was so taken by the society that I decided I would like to own my very own society tie and thanks to my creative friends Barry McCabe and Iris Hung I was able to create one bearing the 2061 logo (the year Halley's Comet returns) I have since worn it to astronomy related events and gatherings ever ready to explain what the 2061 stands for! Since uploading I have only ever encountered two 1986 Halley's Comet Society tie owners but discovered that the National Maritime Museum, Greenwich have one in their collection along with thirteen of the '2061' variants! So, what else has happened since uploading that post?

In 2015, Dr Brian May announced the sad news that despite all efforts, plans to convert Sir Patrick Moore’s former home Farthings in Selsey into museum (as Patrick had hoped) the idea had been abandoned due to impractical reasons and so the effects housed within had to be divided up and the house put up for sale and so Patrick’s professional possessions, observations and collection were donated to the Science Museum to be permanently available to scholars along with the promise of a permanent monument dedicated to Sir P. Other items were (quite rightly) donated to the Chichester Planetarium (of which I have also mentioned before on this blog and highly recommend you visit) because as Dr May explained, “This small but busy planetarium is one of the best possible living monuments to Patrick’s lifelong commitment to Astronomy. Every year it gives thousands of young students their first taste of the wonders of the Universe – and doubtless at this very moment is inspiring the next generation of Astronomers – as Patrick himself did for over half a century.” Some of the most salable of Patrick’s possessions were consigned to Christie’s, in London (his trademark monocle sold for £688) with all remaining items to be auctioned off at HenryAdams Auctions in Chichester on the 7th and 8th of October 2015. 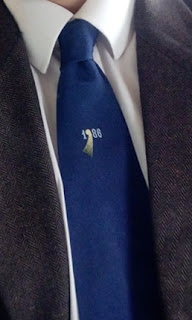 Many of the effects on offer at the Henry Adams Auction seemed to represent the great man such as his beloved xylophone (which sold for £1,005) his typewriter, orreries and Hawaiian shirts. At the auction 10 limited edition memento boxes were created containing a selection of Patrick’s belongings offering fans the opportunity to acquire their very own keepsake, as I looked through the catalogue there was one box that was of particular interest to me lot: 717. Not only did it have the Hawaiian shirt that he wore during our book launch in 2009 and the evening I proposed to Beth, but also a pewter mug, purse, pipe, paperweight, letter opener, four shot glasses and there among it all was a blue tie with '1986' embroidered on it...   His official Halley's Comet Society tie! I am delighted to say that I was the successful bidder at the auction and I now have my very own Halley's Comet Society tie, the very tie (if not THE tie) that prompted me to research into the society in the first place. Being able to say that I finally have one is fantastic, to know that it once belonged to Patrick makes it all the more special to me, I am delighted with it. Now if I can just figure out what that tie clip he wore was...

© Arfon Jones 2019. All images are copyrighted throughout the world.
Posted by Arfon Jones at 5:09 pm No comments: 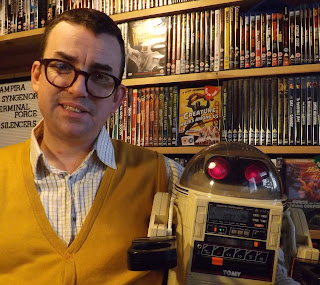 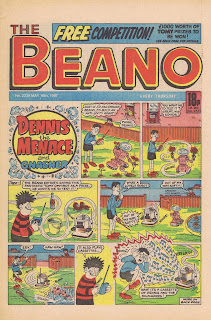 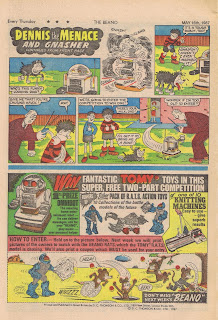 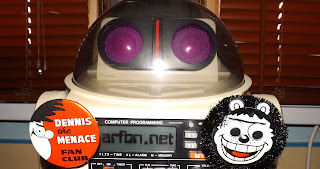 My sincere thanks to Gavin Williams for bringing this to my attention.
© Arfon Jones 2019. All images are copyrighted throughout the world.
Posted by Arfon Jones at 11:29 am 2 comments:

Trying out something different on my YouTube channel, a time-lapse of painting done back in May entitled 'Gentlemen of Horror' a tribute to Vincent Price, John Carradine, Christopher Lee and Peter Cushing whose work I have always admired and the now seemingly lost tradition of the late night movie. Every week, growing up, I would seek out their movies located at the very bottom of the TV listings (the TV listings serves as the backdrop of this piece) I hope to feature this painting in my upcoming, self published/ biographical book devoted to my monster memories from the 80’s and 90’s someday- but in meantime here it is as a video, offering an inside into my creative process. I hope to make many more of these videos so click "like" and subscribe and ring that bell to me notified of the next one!

© Arfon Jones 2019. All images are copyrighted throughout the world.
Posted by Arfon Jones at 11:08 am No comments: