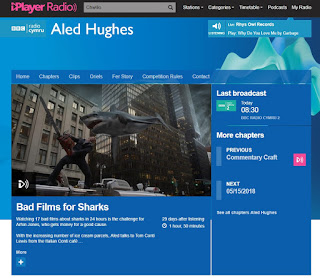 Like a Great White heading for the beaches of Amity Island my 24 hour Shark A-thon gathers momentum! This time I was on Aled Hughes's BBCRadio Cymru (Radio Wales) show to discuss shark movies and the challenge itself! I’ve been on the show a few times now and it’s always nice to chat with Aled and I thank all involved for allowing me the opportunity to tell everyone about my charity shark movie challenge. As ever our conversation has been posted on the BBC website (our conversation starts at 12:27) and as always I have transcribed/translated it for the benefit of all you non-welsh speakers!

Aled: “Now there are films about sharks... (Jaws theme plays) That’s the most famous one without a doubt, its great film, quite possibly one of the greatest movies ever but there are also some terrible ones and I am now going to say good morning to Arfon Jones. Arfon welcome”
Arfon: Good morning Aled how are you?”
Aled: “Very well thank you, why are you going to watch 17 of the worst shark movies in 24hours? Are you not going to bed?
Arfon: “No! I’m going to stay in my chair!
Aled: “Are you sure this is a good idea?!”
Arfon: “Errr, I’m beginning to wonder....But no! I’m going to try and break my own record by having 24hours-an entire day devoted to these films in the hope of raising as much money as possible for the Alzheimer’s Society”.
Aled: “hmmmmmm...yeah, Ok. It’s a good cause but how are you going to prove that you’ve done this?
Arfon: “Well, I will be on Facebook and I will keep a log if you will, adding  updates as the films start and there will be a clock next to the TV so everyone check the times, so they can be certain that the movie is running.”
Aled: “It’s for a good cause, have you done this before?”
Arfon: “I did one for Children in Need about two years back, where I watched all 12 Friday the 13th movies in one sitting and that took around twenty and a half hours to complete.”
Aled: “I’ve only read some of the titles and I don’t know how you’re going to stay awake! Mega Shark vs. Crockasaurus.
Arfon: “That one doesn’t sound so bad; I think that might be one of the better ones...”
Aled: “Raider of the Lost Shark"
Arfon: “There you go!”
Aled:” House Shark”
Arfon: “yup”
Aled: “Snow Shark....Where do you get these?!”
Arfon: “well, for some reason there seems to be a lot of them being released at the moment...But the list you have there now has been scaled down somewhat...”
Aled: (surprised) You have 17 movies on your list how many did you have originally?”
Arfon: “Originally I had over 20”
Aled: “So are these fairly new movies?”
Arfon:“Oh yes, I’d say that the oldest was released round fifteen years ago?  They have been slow, but I would say that that there has been a lot more of them in the last five years or so...”
Aled:” These must be awful Arfon?!”
Arfon: (chuckle) seems like it doesn’t it?!”
Aled: “Have you seen any of them?”
Arfon: “No not all of them, I’ve seen Shark Exorcist and er... Sharknado... Have you seen that that one?
Aled: “No, I haven’t if I’m honest.”
Arfon:” Imagine if you will eight or so tornadoes going on, hitting a city and they are all filled with sharks... So you’re not only dealing with the tornadoes your also dealing with sharks falling from the sky!
Aled:” I’ve never heard of such a thing!...”
Arfon: “There are four of them... “
Aled:” Four?”
Arfon:“Four movies in that series”.
Aled:” Is there?! What with the same premise?!”
Arfon: “Yes. Oh, my apologies there are five of them! Another was recently released!”
Aled: “I can’t believe it! I wish you all the very best with it, if you can stay awake it will be a challenge! And people can sponsor you? Can they do that through Facebook?
Arfon: “If they find me on facebook they will find the relevant links there. I’m doing this through Justgiving but they will find the link on Facebook and if everyone can give something that would be great!”
Aled: “Wouldn’t be easier to watch Jaws back to back for 24hours? You know... a good film?”
Arfon: “Well yes, I was going to include Jaws in the line-up but then I couldn’t pass up the opportunity to watch a film featuring a three headed shark...”
Aled:” Now I’m glad you didn’t include Jaws in the line-up! Arfon, thanks for the chat”
Arfon:” Thank you Aled. Take care!”

To sponsor me during my 24 hour Shark A-thon please follow this link and tell your friends!

© Arfon Jones 2018. All images are copyrighted throughout the world.
Posted by Arfon Jones at 7:53 pm 2 comments: 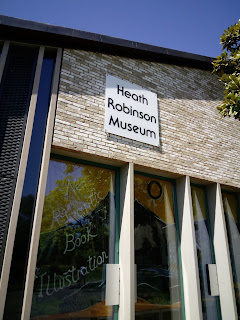 Last week I finally had the opportunity to visit the Heath Robinson Museum in Pinner. A museum dedicated to the work of one of my favourite artist/illustrators (you guessed it) Heath Robinson (1872–1944). When I first heard of plans to create this permanent exhibition of his work I was all for it! After all how many other artists can claim that their name is used to describe the appearance of something? After many years of hearing people describing something as “A bit Heath Robinson” I looked him up in the library and adored his work from then on. After following progress online about the proposed museum various events, donations from fans and residents, local businesses and the Heritage Lottery Fund helped make the museum a reality and it was opened by local author and children's writer Michael Rosen on 15 October 2016 and apparently it was the first London museum in over 40 years to be purpose-built in Greater London. I’ve mentioned the museum before, when they opened the museum a secret art sale was held offering 170 6”x 6” canvases for sale with all proceeds going towards the museum and I was artist number 58 donating a glow in the dark portrait of man himself. Sadly I wasn’t able to attend the opening ceremony so my visit last week was doubly special to me. So there you go, I’ve enclosed a small sample of photos please be sure to call in on them and see it for yourselves and show your support! 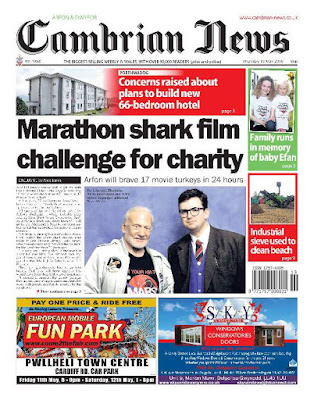 Well, it's in the paper so it must be true! It's official, this July during Discovery Channel's Shark Week I Arfon Jones will be watching 17 shark movies in one-24 hour sitting for the Alzheimer's Society. The Cambrian news ran the story, here is the article written by Alex Jones.

MARATHON SHARK FILM CHALLENGE FOR CHARITY
A SCI-FI fanatic cannot wait to get his teeth into a bizarre 24-hour challenge of watching 17 of the worst shark films his friends could think of back to back.
Arfon Jones, 39, an illustrator from Nefyn, has set himself the ‘sharkathon’ to raise money for a charity close to his heart.
All sponsorships and donations raised by Arfon’s challenge – which includes titles such as Mega Shark Versus Crocosaurus, Raiders of the Lost Shark and Shark Exorcist – will go to the Alzheimer’s Society, an organisation which has supported his family in recent months. “On 25 July, during this year’s Shark Week, I will watch the worst shark movies ever made in one 24-hour sitting,” said Arfon, who created comic strip Vincent the Vulture for the Cambrian News 20 years ago. “So why am I doing this? Alzheimer’s is a terrible condition that affected both my grandparents and so I am doing this for my grandmother Marie Julia Roberts who died this year. “Both my grandparents had to go into homes. Had they still been together this would have been their 60th year of marriage.
“I wanted to support the charity because they are not only trying to find a cure but also work with people and family affected by the condition.”
For more information, or to donate, please visit www.justgiving.com/fundraising/arfons24hoursharkmoviemarathon.

So there you go, please consider sponsoring me and supporting this worthy cause. Thanks to all that have and that have helped spread the word!

© Arfon Jones 2018. All images are copyrighted throughout the world.
Posted by Arfon Jones at 3:36 pm No comments: 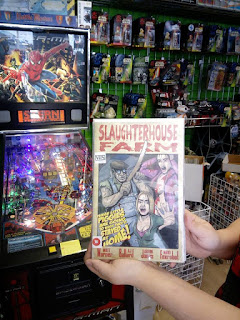 Back from my travels, I was staying in Watford this weekend and was delighted to finally have a chance to visit Geeks on Queens Road! They have a vast array of toys both vintage and new and of course comics!
Amongst all the back issues they had issues of Slaughterhouse Farm!
I picked up a Tingha & Tucker TV annual and some A-Team and Knightrider stickers! Be sure to pop in and see them, its well worth a visit, tell them Arfon sent you!

© Arfon Jones 2018. All images are copyrighted throughout the world.
Posted by Arfon Jones at 10:32 am No comments: 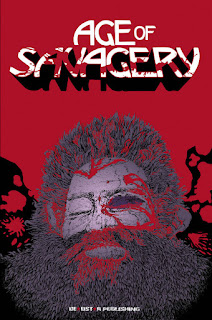 Deadstar Publishing's Age of Savagery is available now for pre-order (for release on Monday 13th May). So what's it about? “The world of Genodd is a placed filled with mystery. The Eldar races have gone, leaving behind feuding barbarian tribes. Loosely affiliated into clans, they wander a world filled with Monuments – remnants of a time gone by. A place where Magic – if it ever existed – is lost.” Based on an original concept by David Powell, this is a collection of 10 stories told over 80 pages of comics and prose pieces. Over 20 creators have work featured including Josh Somerville, Chrissey Harrison, Dave Charlton-Whitaker, AtlantisVampir and many others including 'liddle old me! Look out for two stories featuring my artwork, 'Epsis' Test' by Lewis James and 'Out of the Pit' by Matt Warner. Follow the link find out more and then pre-order your own copy!


© Arfon Jones 2018. All images are copyrighted throughout the world.
Posted by Arfon Jones at 6:37 pm No comments: