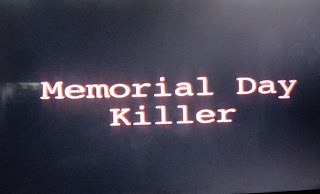 Posted by Arfon Jones at 8:27 pm No comments: 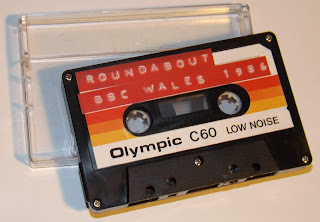 Omnibot once again proving his worth, not only helping me around the studio and listing things on eBay to raise funds but also helping me to upload some vintage cassettes onto my YouTube channel! First up a clip from an episode of ‘Roundabout’ that aired on BBC Radio Wales in 1986 staring Anita Morgan (who was the very first to speak on the station back in 1978) who had visited my hometown of Nefyn, North Wales to chat with some of the locals about village life, this clip features my mother Emrysia Jones, grandmother Marie Julia Roberts (1938-2018) and my great-grandmother Mary Hughes(1907-1993) the clip is particularly poignant for us as a family as it allows us to hear my Grandmother and Great Mother again, we hope it will also be of interest to you. Have a listen. Or just read the transcript.

Posted by Arfon Jones at 7:47 pm No comments: 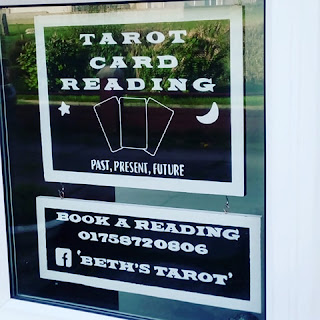 Have I mentioned that Mrs Jones reads Tarot? Reading the cards as a divination tool to see the past present and future, reading them intuitively, which means she doesn’t use a spirit guide, instead reading through feelings and intuition, calling on her inner voice to guide her to the meaning of the cards for each person. Beth has been reading the cards for some time now, offering open (general) readings and specific question readings helping many establish a clear picture of what is happening in all aspects of their lives and helping to find the answers and it’s been very well received. So well in fact that we needed a sign for people to find us- This very hand painted sign in fact!    Helping people to find the right location to find the answers they seek. Find out more or book a reading via her Facebook page. 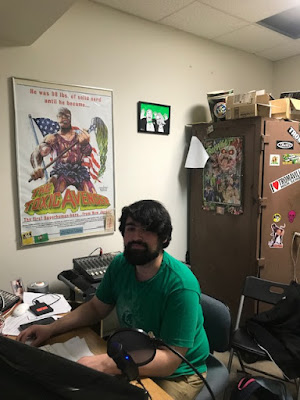 I believe I may have mentioned meeting Troma Entertainment head honcho Lloyd Kaufman at the Starburst Film Festival... Well, Uncle Lloydie e-mailed this picture to me last week. This is the Editing Room at  Troma Entertainment, and hanging up on the wall beside the framed Toxic Avenger poster is one of my glow in the dark paintings! (which can also be seen on Lloyd’s Instagram page) As an artist it is always gratifying to know that your work is hanging on someone’s wall, but hanging on the wall of Troma Entertainment?! #delighted!


© Arfon Jones 2019. All images are copyrighted throughout the world.
Posted by Arfon Jones at 4:33 pm No comments: 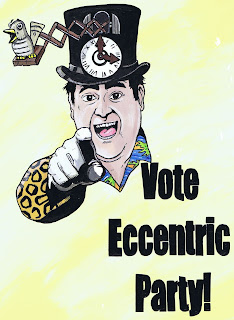 Shocked and saddened, to hear of the passing of Brian Borthwick AKA Lord Toby Jug founder and leader of the Eccentric Party of GreatBritain and friend who died on Thursday. Having been a long-standing member of the Monster Raving Loony Party he went out on his own and formed The Eccentric Party of Great Britain in 2015, encompassing the spirit of Screaming Lord Sutch, who had been a friend and inspiration to Toby for years (he also backed him at numerous gigs) he stood against top politicians in general elections across the country over the years. I made contact with him that first year, I honestly can’t remember who reached out to whom but we became friends and I joined the party, of which he elected me Viceroy of Wales and Minister for Monsters (he also tried to get me to stand for local election) and although we never met in person we spoke on the phone and on Facebook numerous times either about the party,projects or his idol Screaming Lord Sutch, such a lovely, friendly man and now he’s in that big polling station in the sky-  Rest peacefully your Lordship, Pip-Pip.

© Arfon Jones 2019. All images are copyrighted throughout the world.
Posted by Arfon Jones at 4:22 pm No comments: 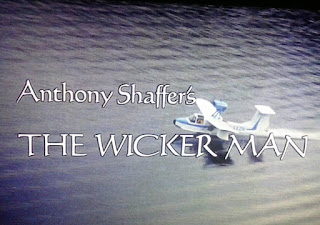 We seem to have strayed from our psycho killer themed ‘holiday’ movies again, this time in favour of a horror mystery, and a classic at that! What can I say about it that hasn’t already been said by movie historians and far more learned folk than I? This would probably the 20th time I’ve seen Sergeant Neil Howie’s fateful trip to Summerisle. You will note that although I try and keep these posts spoiler free I said ‘fateful’ there, well I’m not so worried this time round, aside from being fairly confident that you will have already seen the film I will also add that this movie shares the same distinction with Planet of the Apes in that climax/final scene of the film features on spoofs and the covers of their Video/DVD releases! But if you haven’t seen it, please put that right! So, shall we meet back here on the 27th of May? Memorial Day? Yes I know it’s when the United States remembers those that served their country and I am in the UK... But...

© Arfon Jones 2019. All images are copyrighted throughout the world.
Posted by Arfon Jones at 12:59 am No comments: