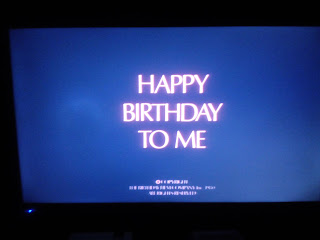 © Arfon Jones 2019. All images are copyrighted throughout the world.
Posted by Arfon Jones at 11:44 pm 4 comments:

Happy New Year to you all! I've set myself a new challenge for 2019 I call it, Happy Horror- day! The success of Halloween in 1978 gave rise to the holiday based horror movie genre and that is why I, Arfon Jones will attempt to watch a Holiday-themed horror film for each holiday/festivity of the year! I must have (Subconsciously) got the idea from Irving Berlin’s Holiday Inn but my only requirement is that the movie takes place during a specific holiday/occasion playing a central theme (images/ motifs from the holidays featuring throughout) and a movie that features a killer wearing a costume associated with that celebration will most definitely meet the criteria!  Each movie will then be documented on this blog. So first up... 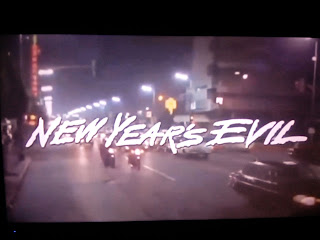 Directed by Emmett Alston New Year’s Evil takes place during (you guessed it) New Year's Eve (and New Year's Day hence why I thought I should start the challenge/ year with this one first) during a live televised show called, Blaze’s Countdown which celebrates the music of that year with callers, calling in the Hollywood Hotline nominating their favorite songs (Think Top of the Pops meets Telethon) the show features various punk/ new wave groups and their fans dancing to their hits, (personally I would rather watch this show than Jools Holland’s Hootenanny!) and features such bands as Shadow and Made in Japan (Shadow play the title song New Year’s Evil twice!). The show’s punk rock presenter Blaze (played by Diane Sullivan) receives a phone call from man calling himself Evil disguises his voice with a “Voice Processor” announces that each time the clock strikes midnight in each time zone, a "Naughty Girl" will be killed declaring that Diane herself will be the last Naughty Girl to be punished. The studio calls in Lieutenant Ed Clayton (Chris Wallace) a man who doesn’t care much for the punk/new wave scene who rather unsympathetically resents having to “pick a phone freak from this bunch!” but agrees to tighten security never the less as, Evil delivers on his promise and starts killing women on the hour (playing tapes of the killings over the phone to taunt Blaze) building up to the climax of the film, which I will not spoil for you.
While researching this film I read that movie critic, Gene Siskel called it "a hideously ugly motion picture” I must disagree with that, although perhaps not the most original concepts the movie does do one thing differently by showing us the killer right from the start, instead hiding his identity and motive from us which is revealed as a twist at the end, in my opinion the film could (almost) pass as a Thriller, If it hadn’t been for the Friday the 13th style "chi chi chi ha ha ha..." effect, set up for a sequel and use of a Stan Laurel mask which is genuinely creepy! It’s not brilliant, but it’s not bad. It’s just a good old fashioned slasher that's worth a look.
Happy New Year!

© Arfon Jones 2019. All images are copyrighted throughout the world.
Posted by Arfon Jones at 9:21 pm No comments: