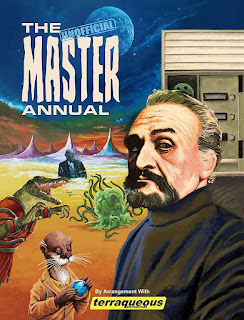 Regular readers of this site (Blogger assures me that I have those) will recall last year's Unofficial Dr Who Annual 1987 by those splendid chaps at Terraqueous Distributors and how I had the privilege of illustrating two stories for it, well they have only gone and done it again! This time-releasing the wonderful, Unofficial Master Annual 2074 dedicated to the original Master portrayed by Roger Delgado. This week I received my contributor edition and just as with the last book I am equally delighted with this as that previously mentioned love and devotion to the series shines through its impressive 136 pages with contributions from well known names such as Alister Pearson, Smuzz, and Andy Walker.
As I said the Unofficial Master Annual 2074 is published by Terraqueous Distributors and available from  Lulu at the print-on-demand price of £23.32 plus shipping costs). So please visit the site and order your own copy.  Well done all concerned, and thank you Terraqueous for allowing me the opportunity to work on another of their amazing publications.

© Arfon Jones 2020. All images are copyrighted throughout the world.
Posted by Arfon Jones at 9:47 am 2 comments: 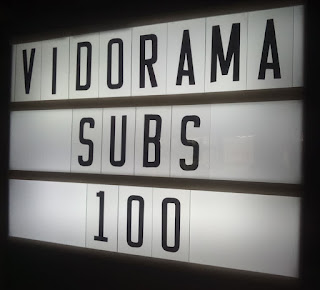 On Saturday I reached 100 subscribers... I realise that some people achieve this figure with no real effort and other YouTubers achieve vast, greater numbers achieving the coveted YouTube Play Buttons all the time but please indulge me here, when I uploaded the Frankenhooker painting video on my channel back in August I told myself, if I had achieved 100 subscribers by next August I would keep doing these VID-O-RAMA videos..
A big THANK YOU to everyone that has helped me achieve this number, there is still a great deal to do but I am very much looking forward to getting on with it, and who knows? perhaps even getting one of those play buttons?

© Arfon Jones 2020. All images are copyrighted throughout the world.
Posted by Arfon Jones at 2:17 pm No comments:

The great Tim Brooke-Taylor died last Sunday, another victim of this dreadful situation we have globally found ourselves in, serving an absolutely devastating blow to our spirits. A great English comedian and actor, there are many other sites online that do a far better job than me in documenting his amazing life and career, he started out as an active member of Cambridge Footlights, along with all the greats that would eventually become the basis of Monty Python's Flying Circus, he was a panellist on I'm Sorry I Haven't a Clue for almost 50 years but I think its fair to say that he will always be Tim from The Goodies.
The Goodies ran on the BBC from 1970 through to 1980 and was tremendously popular, they had various specials, comic strips, books and even made it to No 4 in the music charts with The Funky Gibbon in 1975. Then in 1980 they were asked by the BBC if they would step aside for one year so they could invest the annual budget into adapting The Hitchhiker's Guide to the Galaxy for television... they never called them back. Let down by the BBC (a recurring theme for the BBC) they moved to LWT and the show aired on ITV instead, alas the the show only lasted one series and that was the end of the Goodies. Frustratingly, it's at around this time that I become 'aware' of television, and so I just narrowly missed them! Bill Oddie was now Dr. Dimple on Tickle on the Tum and Tim Brooke-Taylor was Derek Yates in Me and My Girl. But the Goodies would get together again in some form in the 1980's for a new project for the BBC, and I was in the front row for this one- Bananaman!


A loose animated adaption of the comic strip of the same name which first appeared in Nutty#1 in 1980 and the series, produced by 101 Productions aired on Children's BBC from 1983 to 1986 and featured the voices of the The Goodies with Graeme (incorrectly credited as Greame on some episodes) as the voice of Bananaman and his arch nemesis General Blight. Bill voiced Crow, Chief O'Reilly and Doctor Gloom and Tim Eddie the Gent, King Zorg of the Nerks, Auntie, Appleman and of course Eric, the ordinary schoolboy who lived at 29 Acacia Road who became Bananaman when he ate a banana! I loved this show, I read the comic strips in the Dandy, annuals, and all the various specials released and each time I read the strips I could hear their cartoon series voices in my head. I had the stationary set in school and I fondly remember being given a Bananaman Easter egg one year.
Fast forward 20 years having been teased with clips from the BBC over the years I was finally able to 'go over' their heads and experience the Goodies for myself on the Internet, and they did not disappoint- beautifully scripted, wonderfully acted and a credit to the skills and talent hired by the BBC at that time, their special guests serve as wonderful time capsules to that bygone era of both Britain and the BBC studios of the 1970's and I still say its one of the funniest shows that the BBC have ever produced.

Then in 2005 after a successful Australian tour the trio (with Oddie appearing via video link) played a full run at the Edinburgh Fringe, (a return for Tim who had performed there back in 1962 with the Cambridge Footlights) with their The Goodies Still Rule OK? show I remember listening to Graeme and Tim on radio 2 promoting the show and thinking how I would have liked to have seen them live, and as luck would have it they toured the UK and on Friday the 16th of March 2007 Mrs Jones and I saw them at the Marlowe Theatre in Canterbury and they were wonderful- it was a warm look back on their career, sharing anecdotes to a packed house. Afterwards we went to the stage door as they both came out, they signed autographs and posed for photos, giving everyone their time, true gentlemen. They did not disappoint. I handed them my 1990 Dandy Special to sign, and they very kindly did so- Tim even told me how much he loved Bananaman- the cherry on the top of a very special Banana Sundae for me!
Since then we have re watched the shows, and I was even been able to introduce them to my daughter, a testament to how special those shows are. Still can't believe we lost Tim, and in such an awful way- a great, senseless loss. Last year a Indiegogo campaign was launched to complete The Goodies -The Movie a feature documentary on The Goodies on their 50th anniversary, sadly it didn't meet its target, but I hope they will try it again in Tim's honour. We need to remember how these people made our nation laugh, now more than ever.
RIP Timbo

© Arfon Jones 2020. All images are copyrighted throughout the world.

Posted by Arfon Jones at 3:07 pm No comments: