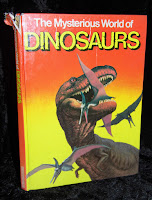 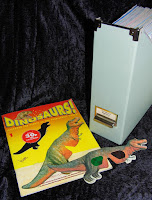 
Update: I seem to have subconsciously ‘pinched’ this idea from TwoHeadedBoy follow this link to his post about the Ladybird Dinosaur book from 1988 (Incidentally I had that book too).
© Arfon Jones 2015. All images are copyrighted throughout the world.
Posted by Arfon Jones at 12:26 pm 15 comments: 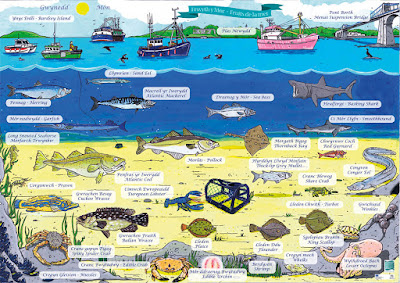 As busy as ever here in the studio, last week I finished working on this for Menter Môn, an EU rural development programme that facilitates rural economic regeneration projects on Anglesey, North Wales. Along with the European Fisheries Fund and the Fisheries Local Action Groups (FLAGS) (set up to provide support for the sustainable development of fisheries areas) we developed this fun, bilingual (English/ Welsh) child friendly educational poster designed to highlight some of the diverse sea life inhabiting the surrounding North Wales Gwynedd/ Anglesey coastline for local schools.
The ‘Frwyth y Môr’ ‘Fruits de Mer’ or ‘Fruits of the Sea’ poster features 31 different species found at the varying depth that they inhabit in the North Wales sea. The original was created using acrylic paint and pen and measured (roughly) 17.50 x 25inches the labels were added afterwards by Mr Tom Pollock of Excellent Creative Design.

The poster completed it was unveiled as a 7 foot (at a guess) tall display at this year’s Menai Seafood Festival an annual event that celebrates North Wales' coastal heritage. Coinciding with Anglesey Marine Week 2015 that promotes the rich wildlife and heritage of Anglesey’s coastal waters the event showcases the best seafood and fish available around the shores of Anglesey with a local produce market and exhibitors, cooking demonstrations, art and craft and live music. I went along to see it for myself and see how the poster was received.
My sincere thanks to Jane Davies and Robert Jones of Menter Môn.
© Arfon Jones 2015. All images are copyrighted throughout the world.