Sir Alfred Charles Bernard Lovell, OBE, FRS Born in 1913. Studied physics at the University of Bristol, obtaining a Ph.D. in 1936. He worked in the cosmic ray research team at the University of Manchester until the outbreak of World War II. During the War he led the team at the Air Ministry’s Telecommunications Research Establishment, developing the H2S, the first airborne, ground scanning radar system earning him an OBE in 1946. he then returned to Manchester with an ex-army mobile radar to continued his research on cosmic rays However electrical interference from the city’s tram system prevented him from doing so forcing him to move to The University’s horticultural/botany department at Jodrell Bank, Cheshire.
The first Transit Telescope constructed in 1947 provided valuable data however readings were limited, a fully steerable telescope was needed prompting the construction of the “Mark I” Telescope in 1957. Standing at 76.2 m (250 ft) in diameter it was the largest steerable dish radio telescope in the world. That same year, the Soviet Union launched the first space satellite, Sputnik I the “Mark I” was the only telescope in the world able to track the satellite's carrier rocket. Since then, it has been used for pioneering work in the discovery of pulsars and quasars. Lovell was knighted in 1961 for his contributions to the development of radio astronomy and served as Director of Jodrell Bank until his retirement in 1981.

© Arfon Jones 2010. All images are copyrighted throughout the world.
Posted by Arfon Jones at 12:32 am No comments: 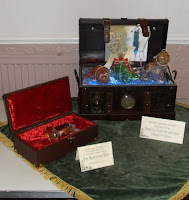 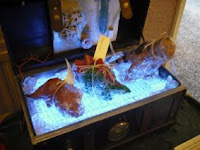 On the Sunday, Rachel and Andy invited us to a picnic! We had a lovely cup of tea and carrot cake under the trees as we discussed ideas for future costumes and props. The sun held out throughout, we tidied up and made our way to the castle, as there was free Gin to be had! Hendricks Gin were one of the sponsors of the event and they were giving free samples to anyone who participated in a game of movie charades ‘The Day of the Dead’ and ‘Psycho’ latter the free gin had been won and consumed before making our way to the closing ceremony. After completely giving up trying to locate my raffle ticket they announced the winners of the contraption competition, Andy’s Dornberger Ætherian Rocket-Pack won this year’s Brunel Award with the Patented Cryo-preservation Curiosity Cabinet being awarded the Highly Commended rosette. And so ended another weekend at the Asylum.
Posted by Arfon Jones at 3:06 pm No comments: