We are rapidly approaching the 100th post and looking back over them I realised that this blog just suddenly happened one day. There was no warning, no introduction or explanation as to who I was or exactly what it was that I ‘did’. True reading the previous posts might shed some light but that is quite a hefty amount of reading to expect of someone! So I thought I would write this comic book- esque issue#0 origin story to serve as an ‘introduction’ to any curious internet user…

I am Arfon Jones and I am an artist/ illustrator based in North Wales in the United Kingdom. I was raised on a healthy diet of 1980’s –90’s television. I also read comics, played with toys and games and created things!  Drawing has always been important to me I am hard pushed to think of a time when I wasn’t drawing or working on something be it drawing, clay sculpture or a puppet of some sort.
I delighted in the works of Tex Avery, Chuck Jones, William Hanna and Joe Barbara, Max Fleischer and Walt Disney and decided that I wanted to become a cartoonist. For several years I worked on my drawing skills taking influence from the countless television shows I watched and the comics I read. A year after the release of the movie Who Framed Roger Rabbit?, a true inspiration to me that strengthened my passion for cartoons, I watched the tv special Happy Birthday Garfield a documentary dedicated to the tenth anniversary of the Garfield comic strip. Hosted by its creator Jim Davis it opened my eyes to the world of comic strips and animation altering my vocation slightly I wished to pursue a career that would allow me to work in both fields. During the early 1990’s I became interested in American superhero comics, in particular the DC and Marvel catalogues, during which I worked at a vintage comic mail order company during evenings and school holidays, proving to be another major influence on my style

In 1995 I enrolled in Art College and studied at Coleg Menai, Bangor where I achieved a National Diploma in Graphic Design then graduating from the University of Wales with a Bachelor of Arts in Illustration. Unfortunately most of my lecturers had differing opinions on what ‘art’ was and this caused many a crossed sword at times causing frustration for me, (but making the few creative people I came into contact with shine all the brighter). Being stubborn I continued my work and developed my style.  During this time I kept myself busy by working on outside commissions being hired for both television and media working on illustrations, comic strips and animation concept art acquainting myself with the world of deadlines.  As I grew older I abandoned the prospect of becoming an animator realising that I much preferred to be in full control of my own ideas and develop them myself. I taught myself how to paint in acrylics and concentrated my efforts on creating single pieces of work and settled on being an artist/ illustrator.
That was 1999. I continued to do so to this day and my work has been publicly displayed and used in various publications I have also illustrated a range of books, comics, album covers, posters, logo designs and private portraits. Although I work mostly in acrylic and pens I also work in three-dimensions.

I draw inspiration from the things I grew up with as a child classic cartoons, television shows, music, comics, retro computer games and toys. I have a fascination for many aspects of popular culture and what most regard as kitsch or even “tacky” along with an interest in both history and science and the way they are used to educate.
I have a devotion for classic cinema particular the comedies of Laurel and Hardy and The Marx Brothers along with all vintage horror and science fiction movies ranging from the Gothic horrors of the 1930 – 40’s to the atomic and “B” movies of the 1950’s. Everything produced by the Hammer Horror studios and the cult classic horror films of the 1980’s tapering off at the end of the 1990’s
If it features an ancient castle, wronged scientist, robots, mutants, dinosaurs, giant insects or alien invasions it has my undivided attention, I try to bring these in to my work, incorporating a sense of fun.
Over the years my craft has allowed me the opportunity to meet and work with the people that have inspired me and brought me into contact with many other creative/like-minded people from around the globe.

© Arfon Jones 2012. All images are copyrighted throughout the world.
Posted by Arfon Jones at 10:12 pm No comments: 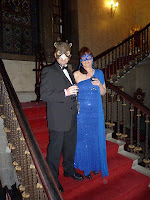 We had dear friends Rachel and Andy up for the weekend three weeks back and we celebrated the summer solstice at the beautiful Glynllifon Mansion for its first Midsummer Masque Ball. Being based in North Wales I am no stranger to Glynllifon and its gardens but I hadn’t been to the house for many years so I was looking forward to visiting it again. The theme of the ball, Shakespeare’s Midsummer Nights Dream.
Beth decided to go as midsummer night itself wearing a lovely blue sequin dress, finished off with Chiffon scarf that she applied stars to. This was attached via a moon broach. To match her dress I customised her mask, which she finished off with strands blue ribbon. To complete the evening sky effect she even wore a single Saturn earring and applied more stars to her hair. The ball website, encouraged guests to come as mythical creatures so I made a griffin mask out of recycled computer print out paper from the studio.  Rachel wore a lovely ball gown complete with fairy wings and Andy went as the Fantastic Mr. Fox!

We made our way there driving beneath the familiar Glynllifon arches and as the car rounded the corner and headed towards the mansion, we were greeted by two Hussars that stood to attention and saluted us! We donned our masks and made our way towards the red carpet (also guarded by more Hussars who were camping in the grounds) after another quick salute we made our way into the magnificent hallway to join the other guests. We saw many creative costumes, everyone had made an effort each one complemented by their surroundings. Between meeting and greeting we went outside to watch the Hussars firing off their cannon! As the mighty bang echoed across the grounds we made our way to a sumptuous buffet followed by the occasional trip to the bar before dancing the night away!
We had a wonderful evening, my compliments to the organisers I sincerely hope to do it again very soon. 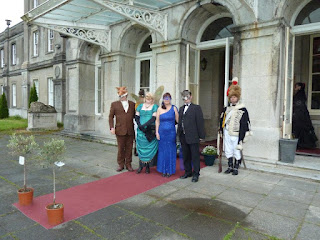 © Arfon Jones 2012. All images are copyrighted throughout the world.
Posted by Arfon Jones at 11:37 am 2 comments: