An evening with The Scottish Falsetto Sock Puppet Theatre 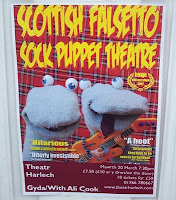 Like many I first discovered this comedy pairing on YouTube. A pair of sock puppets with Ping-Pong balls for eyes tackling serious, sometimes topical themes in the form of skits and songs.
Written and performed by comedian and comic book writer/ artist Kev F Sutherland, the show was nominated Best Show at the Leicester Comedy Festival Awards in March and won the Edinburgh Festival Insider Comedy Award in 2009. Having watched all their great videos on YouTube image my joy when I discovered that they were performing live in my neck of the woods!

So, on Saturday 20 March 2010 Beth and I embarked on Harlech to see the Scottish Falsetto Sock Puppet Theatre LIVE! After a lovely stroll around Harlech (spotting several posters along the way)We enjoyed the breathtaking view from the castle and enjoyed a fantastic meal. As the sun started to set on Cardigan Bay we made our way to the theatre.

Comic magician Ali Cook supported the Socks. His sleight of hand has made him one of the pioneers of the alternative magic scene. Having written and starred in several television series and sell-out shows in Edinburgh and the West End we knew this was going to be good... we were not disappointed! A fantastic mix of comedy and amazing magic tricks! 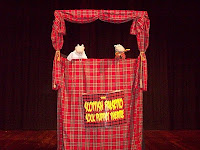 Then came the Socks, who gave a hilarious lecture on the history of films, ranging from Westerns to Horror and thanks to quick costume changes a reenactment of Star Wars! They tackled the issue of Swine Flu and delivered a tribute to Michael Jackson! The show was an amazingly funny, a brilliantly original one-man show that didn’t disappoint. A fantastic night out I highly recommend.
Check out their site for tour dates!


© Arfon Jones 2010. All images are copyrighted throughout the world.
Posted by Arfon Jones at 5:20 pm No comments:

Wilfred Makepeace Lunn
Born in 1942, first started writing and making miniature bicycles out of firewood wire when he was teaching lip-reading + religious knowledge at ‘Odsal House School for the Deaf’ in Yorkshire. He constructed miniature cycles one of which was small enough to be housed inside a bottle! The bikes would perform other functions aside from transportation including catching worms and removing creases from tents! During an exhibition of his work he was invited to demonstrate his inventions on the television show ‘Late Night Line Up’ and later ‘Vision On’ the award winning BBC series designed for deaf children. Lunn became a household name appearing on countless other programmes demonstrating his strange and wondrous inventions including the self blowing flag, a pipe stabiliser for smokers with false teeth, the exploding milk bottle protector, the anti molest trouser zip and the clockwork running fast food for fat dogs.

© Arfon Jones 2010. All images are copyrighted throughout the world.
Posted by Arfon Jones at 11:48 am No comments: