“Though there are some who have evolved even further against the grain and gained an innate ability to use their gift to design and create. Arfon Jones is one of these special creatures that just never understood the meaning of “not”
-Ladies of Steampunk Magazine #1 2012. 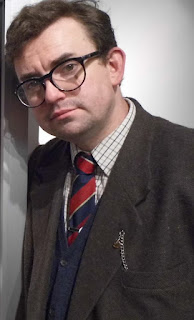 My name is Arfon Jones I am an artist/ illustrator based in Gwynedd, North Wales in the United Kingdom. Although I hold a B.A. in Illustration I regard myself to be a self-taught artist, I work mostly in acrylic and pen turning my hand to three-dimensional pieces from time to time. My work has been publicly displayed in the United Kingdom, Europe and the United States and used in wide range of publications, books, comics, magazines, dvd’s, posters, logo design and private portraits.
I welcome commissions, feel free to get in touch to discuss any ideas you might have.

Inspiration comes from all over, mostly the things that I grew up ranging from vintage cartoons, and television shows, films and music to comics, computer games and toys. I have long had a fascination with popular culture along with science, history and art and the way they are presented in education through documentaries, factual programming and textbooks. Film also plays a big part in my work I delight in the work of Laurel and Hardy and The Marx Brothers and have a deep rooted passion for classic animation, namely Warner Brothers, MGM, Disney, Fleischer, and Hanna-Barbera studios. I have devotion for vintage horror and science fiction movies ranging from the Gothic horrors of the 1930 – 40’s to the atomic and “B” movies of the 1950 –60’s. Japan’s Kaiju movies, everything produced by Hammer studio’s and cult/classic horror films from 1970’s and 1980’s tapering off at the mid 1990’s. In short, if it features an ancient castle, wronged scientist, attractive women, robots, mutants, dinosaurs, giant insects or alien invasions it has my undivided attention. Much the same could be said for my television viewing habits as most of my favourite programs are classed as ‘cult programs’. I often try to combine these factors along with the other previously mentioned elements in my work, while incorporating a sense of nostalgia and fun that both entertains and engages the viewer.


“Arfon Jones is one of our better artists, and the enclosed examples here will show you why. These paintings by our Welsh artist Arfon Jones show you the kind of work that he is so capable of. Look at these paintings and then enjoy them as much as I do.”
-Sir Patrick Moore CBE FRS (1923 –2012)


“In our somewhat bizarre area of work it’s essential you have a recognisable style. Arfon has achieved a style particularly with his distinctive illustrations. His cased objects are of a convincing quality and very importantly are essentially plausible.”
– Wilf’ Lunn

“There is a non-translatable German word “verspielt”, the nearest would be “playful”, which feels totally wrong; it is applicable mainly to men. It indicates that whilst being perfectly sane, intelligent and skilful people, they have the talent to season their actions and achievements on appropriate occasions, with a fundament of humour and play. It pleases them, but may even be contagious! To an extent it permeates their personality, manifesting itself not only in actions but also in speech, spoonerisms, making up funny words and such like, adding a degree of spice to life. I have seen a number of examples of Arfon Jones’s work and have no doubt whatsoever that he is a master himself of being “verspielt”, with the additional merit that he can produce artefacts, which serve the needs of this rather pleasant community. I have seen luminous illustrations, 3D representations, plastic ducks, pictures of significant scientists also in 3D, all executed with considerable talent. I am vespielt, but I wish I had his talent!”
-Professor Heinz Wolff FIEE. FIBES FRCP (Hon) FRSA
(1928 – 2017)

“Arfon has a very real artistic ability, He has that important (and rare) talent for conveying character in a portrait -- something that is difficult to do and requires high intelligence and perception as well as special drawing ability.”
-Rev Lionel Fanthorpe


"Arfon's characters are always well crafted. He especially does the moody and macabre particularly well. His artwork is particularly good at capturing perception, so as to best immerse the reader in the subject."
- Adam Davies Explorer/Cryptozoologist

“Arfon Jones is leading the charge for insanely great, ghoulishly fun horror and fantasy art in the new millennium!”
-Donald Farmer director of Shark Exorcist,
Cannibal Cop and Hooker with a Hacksaw