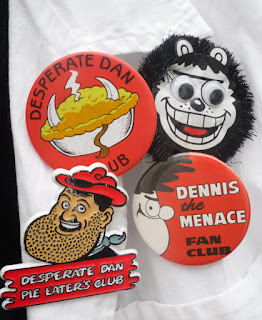 I thought I would write another of these reflective/ nostalgic posts as they, much like my previous ‘Monster Memories: Spooky Chews', post offer some insight into my work. The subject of this post, comics, or more specifically the comics of D. C. Thomson. I have been reminiscing more than usual about these comics since they announced that the Dandy will cease publication on its on its 75th birthday this December unsurprisingly the news has touched many a nostalgic nerve in Britain. Many mourn the loss of a childhood heritage while others say the blame falls squarely on us for not buying the comics and supporting them in the first place. I agree, but my conscience is partly clear however, because I was always a Topper reader and they stopped publishing that back in 1993. (Although I still bought the Dandy from time to time if only to see how Beryl the Peril was getting on). Never the less it will be sad to see it come to an end, if not for the people the comic employs but for the next generation of readers. The future Brits no longer able to go to their local newsagents and pick up the latest exploits of Korky the Cat, Bananaman and of course Desperate Dan. 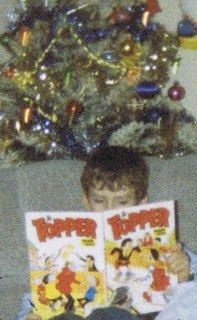 Comics have always played an important part in my life, whenever I am asked who my first was DC or Marvel? I always answer D. C. Thomson! This Dundee based publisher was always an essential part of my childhood providing me with weekly adventures and colourful characters.
As I mentioned previously I was a Topper kid, my father would buy it for me every week. Being a huge comic fan, with what pocket money I had I would also buy The Beezer along with (‘Hoot’ anyone?) and of course The Beano and The Dandy. (Whizzer and Chips, Buster and Oink… but those are other publishers and a blog entry for another time).
When I wasn’t gorging myself on weekly comics I was making full use of a vast back catalogue of D. C. Thomson annuals that I had at my fingertips. These once belonged to my parents and went as far back as the mid 1960’s so I was able to follow the adventures of characters unheard of by many of my fellow 1980’s readers! This collection of annuals would grow with each passing year, as there was always at least one new one waiting for me under the Christmas tree. Despite the Beano and Dandy being the clear nation’s favourites my loyalty remained with The Topper and Beezer throughout the 1980s and in to the 90s, but by then sales had slumped. Children's television and video games were blamed for poor sales and with that D. C. Thomson decided to merge the Topper with the Beezer. This decision suited me just fine, I was now able to read two of my favourite comics for the price of one in between watching television and playing video games! But like all good things it came to an end the comic fizzled out in 1993. 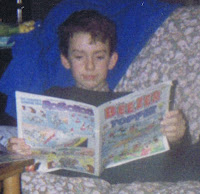 Throughout my time growing up, reading the comics I dreamt of some day working for D. C. Thomson. I imagined myself drawing my favourite characters as my career in animation took off… Having sent examples of my work to D. C. Thomson much like my career in animation it wasn’t to be I received a nice letter (which I still have to this day) followed by a telephone call from then Beano editor Euan Kerr. He kindly explained that ‘ghost’ artists needed to draw established characters as close as possible to their regular art style, “I’m afraid this is not the case with your drawings. Your own style, good though it is, is much too evident’ and that was it… One of the few times in my life where I accepted defeat and gave up, I often locked horns with my tutors at art college but in this instance I simply accepted it, as he was the editor of the Beano he knew what he was talking about!  But I often wonder how things might have turned out had I been accepted. Never the less the comics have remained with me throughout, and despite succumbing to the siren call of American superhero comics I remained true to D. C. Thomson. I still have my comics they are filed in order on shelves alongside alphabetised annuals and their influence regularly emanate from me through something that I do (you should see how I serve Bangers & Mash). It has been reported that the Dandy will still exist online, which is something I suppose but a web site can’t hold that same glorious feeling of opening the latest issue and feeling the freshly printed paper and ink on your finger tips! But then, books are going through the very same woes… I sincerely hope that the cancellation of the Dandy will at least stir some public support to assure that it doesn’t happen again, because it’s all up to the Beano now!

© Arfon Jones 2012. All images are copyrighted throughout the world
Posted by Arfon Jones at 2:09 pm