A little story. Back in 1987 I noticed that people had been putting coloured paper in their windows and cars, baffled and intrigued by this I stuck a neon green flyer that had been put through our letterbox the previous day in my bedroom window. I was 8 years of age, unaware of what a General Election was and had just (unwittingly) pledged my support for Plaid Cymru, simply because I liked the colour of their flyers… This was to be my first introduction into the word of politics. Fast forward to the 1992 General Election, Undeterred at still being too young to vote I became interested in politics (I was like that). Bruce Dickinson & Mr Bean’s Comic Relief cover of (I Want To Be) Elected was in the charts and thanks to countless hours of television, along with regular doses of the News and Spitting Image I was (much to my parent’s amusement) able to name most MP’s and their respected parties. I would gladly talk to anyone about politics and recall one such time when a friend’s mother making conversation humoured my 12-year-old self asking whom I would vote for. Having listed the pros and cons of voting for a Conservative or Labour government I concluded that I would vote for Screaming Lord Sutch of The Official Monster Raving Loony Party. Once again flashy colours had won me over…

The Official Monster Raving Loony Party was established in 1982 by the musician David “Screaming Lord” Sutch the 3rd Earl of Harrow, whom armed with his ‘bizarre’ policies became a familiar face come election time in the United Kingdom. As much an electoral tradition as campaign rosettes and empty promises he served as leader until he tragically took his own life in 1999 during which time he held the record for losing all 41 elections in which he had stood. Throughout all the times I took an interest in politics there was Lord Sutch either standing in the background or just to the side, filling the screen with colour in his trademark top hat, leopard skin coat, campaign badges, giant rosette and megaphone. When he died I would almost say that my interest in the electoral process and the build up to Polling Day died with him, as elections didn’t seem the same afterwards.
Had he still been with us, he would have celebrated his 75th Birthday today and so I use this poignant day to say that a little bit of Screaming Lord Sutch has been added to my collection of Wonderments and Atrocities!  What self-respecting museum doesn’t have a piece relating to an important political figure? So here we have an original Screaming Lord Sutch leopard skin coat! Lord Sutch wore this very coat when he first ran as a Monster Raving Loony party candidate at the 1983 Bermondsey By- Election and wore it at numerous Monster Raving Loony party campaign trails and ‘victory’ celebrations across the British Isles through to 1989. 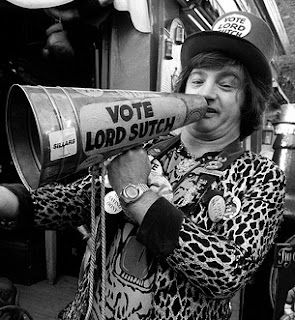 Before being added to my little private museum the coat resided in Florida, United States with Sir Andrew - Lord of Shawcastle. A lifetime member of the Official Monster Raving Loony Party, the Rock 'n' Roll Loony Party and honorary member of Der Deutsche Rock 'n' Roll Und Loony Partei. Sir Andrew not only Co-Founder of the US National Official Monster Raving Loony Party, but was also the US delegate to the Loonited Nations and former backing musician for Lord Sutch himself.

The coat not only provides its own provenance it also tells a story that can be pieced together from clues that have remained attached to the coat all this time.

A badge on the lapel of the jacket that not only has Lord Sutch’s name written on it but also Newcastle-under-Lyme. His Lordship was a candidate at the 1986 Newcastle-under-Lyme by-election on 17 July 1986 upon which the Official Monster Raving Loony party collected 277 votes. 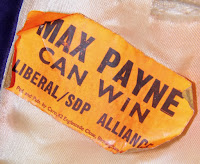 A Liberal SDP Alliance sticker representing Max Payne declaring that “Max Payne Can Win” is from the Chesterfield by-election held on 1 March 1984. Max didn’t win but instead came second to Labour with 18,369 votes. The Loony Party received 178.

A sticker representing another Payne, advising us to “Vote for Cynthia Payne X” Kensington July 14th. This Cynthia Payne is in fact THE Cynthia Payne (1932- 2015) that made headlines during the 1970s and 1980s when it was revealed that she was a madam running a brothel in the south-western suburbs of London. The tabloids were awash of tales of her ‘special’ parities attended by elderly men dressed in lingerie paying with "Luncheon Vouchers". She was sentenced to eighteen months in Holloway prison in 1980 but only served four months. Her home was raided again for the second time in 1986, although she was acquitted that time she vowed to change Britain's sex laws by becoming an MP and (unsuccessfully) stood for Parliament as a candidate for the Payne and Pleasure Party in the Kensington by-election in July 1988. Lord Sutch and Cythia Payne were very close friends and both competed in the election Sutch received his lowest ever count of 61 votes falling behind the Payne and Pleasure Party who received 193. 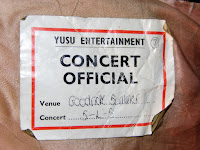 Two other labels that read, “YUSU Entertainment Concert Official” YUSU stands for ‘York University  Students' Union’ a regular performer at student union events it would seem that Sutch had been booked for 'Goodricke Summer Ball’ (Goodricke college). He was also a candidate for the Richmond (Yorks) by-election held on the 23rd of February 1989 acquiring 167 votes (William Hague won, gaining 19,543 votes) but he was supporting a new leopard skin coat at this point!

So there you have it my piece of political memorabilia from the very early days of the Monster Raving Loony Party. As I previously mentioned work has begun on a creating a permanent exhibition devoted to Screaming Lord Sutch in my museum of Wonderment and Atrocities and I will post an update as soon as its completed. Normally I prefer to post images when the project is done, but this time I thought I would give you all a little sneaky peek at a time when friends and followers remember the life of the wonderfully unique man that brought colour to elections and led the raving loonies of this land. 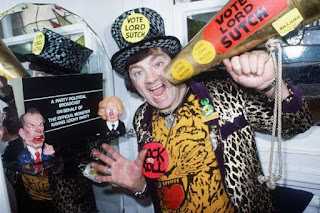 Dedicated to “Screaming Lord” David Edward Sutch (1940 –1999)
My sincere thanks to Lord Toby Jug for the photographs.
© Arfon Jones 2015. All images are copyrighted throughout the world.