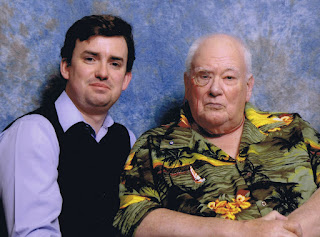 This is a very difficult post to write as I lost an inspiration and friend today, Sir Patrick Moore, CBE, FRS, FRAS passed away peacefully at his home in Selsey at the age of 89. This blog post will undoubtedly be lost amongst millions of other tributes being left for him as his influence carried across the entire globe. Tributes left by eminent Astronomers and scientists, men who have walked the moon and observed it in their back gardens will be mourning his loss. Sir Patrick had been on our screens since 1957 so he was a reoccurring, enduring figure on our screens as I grew up. During the 80’s and 90’s it seemed that he was either telling me about the Universe on ‘The Sky at Night’ or telling me how to cheat at video games with ‘Games Master’. Between these shows I would read his books trying to make sense of the night sky.  When I was at college and working through the night on a project I would often catch ‘The Sky at Night’ and treat it as a well-earned break I would then go outside to take a look and marvel at it all. In my 20’s I finally wrote to him and received a reply the following day. Several other letters were exchanged before being invited down to his home in Sussex, this visit became one of many there after. All the times I saw him he never let me down a true down to earth gentleman that lived up to my expectations and I feel truly honoured to have met him and call him a friend. Always supportive of my work I was fortunate to be able to work with him once, illustrating one of his books and our last endeavour was arranging my surprise marriage proposal to Beth in his garden last year. Looking up at the night sky has become all the more poignant now as I think of his legacy. Thank you Patrick for your inspiration, guidance, wit, generosity and friendship, I will miss you.

EDIT: 12/03/2018 I found this clip on my phone of Patrick speaking at the Autographica 12 event at the Radisson Edwardian Hotel, London on the 25th of October 2008

© Arfon Jones 2012. All images are copyrighted throughout the world.
Posted by Arfon Jones at 9:05 pm