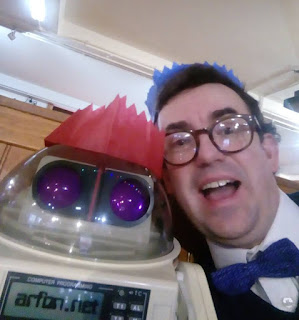 December is here again and the annual tradition of the office Christmas party has been and gone and a good time was had by all! “But wait a minute here, this guy is self employed isn’t he?” you say; well you must be new to arfon.net!  Four years ago I asked why should the traditional ‘office do’ only be available to workforces higher than a one?  So back in 2015 I decided to do something about it and organised the first ever (I think) lone workforce arfon.net Christmas staff party!  With no minibuses to chase up, no quarrels, bickering or ill feeling between employees the plan was flawless and provided  some much needed festive cheer and this year’s was no exception!  But, there was one slight difference to this year’s party, oh yes! Those of you that are regular to this site will no doubt be aware that arfon.net’s work force has increased by 1 this year in the guise of my new robot sidekick Omnibot 5402 RX! Omnibot has been here in the studio since February proving himself to be an essential member of the team answering the phone, bringing refreshments, leaving birthday greetings on social media and of course not forgetting excavating my vast collection of collectibles and offering them up for auction to help finance projects and artistic endeavors in our new feature Omnibot’s Robot Root- Out. 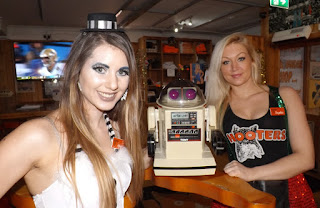 Those of you that follow this site closely will also know that Hooters of Nottingham has hosted each Crimbo shindig since the first. “Delightfully tacky, yet unrefined” and located at the Hicking Building on London Road this is the only Hooters in the only UK and they always provide great food and service. We (along with Mrs Jones, my +1) were shown to our booth by a Hooters girl dressed as a snow woman who seemed taken by Omnibot! Having made the inevitable “pulled a cracker there” joke we did just that! My cracker contained 3 golf tees, a joke (“What do you get when you cross a snowman and a vampire? Frostbite!”) And the essential paper hat (blue) which I wore as did Omnibot (red) as you can see in this obligatory selfie (first picture- I’m the one on the right) oh, Omnibot’s cracker contained a plastic stencil and his joke was “What’s bad tempered and goes with custard? Apple Grumble”( apparently he had heard that one before)Mrs Jones had the same joke and gift the paper hat was blue. 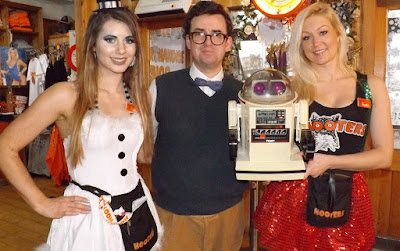 After the Secret Santa gift exchange (I got a Mr. Rogers Funko Pop figure and he got a rather snazzy NASA sticker) our  Christmas lunch arrived the boneless Hooter’s chicken wings with Cajun sauce for me and half rack ribs for Mrs Jones and Omnibot had the curly fries and it was delicious and highly recommended. Like all good things the party came to an end and as we made our way out Omnibot insisted that he have his photo taken with the Hooters girls! This photo will now be pinned to our arfon.net Christmas staff party bulletin board! Big thank you as ever to everyone at Hooters of Nottingham for playing an integral part in our little tradition, the warm welcome and great food and for helping make this staff party a Holly Jolly one! Merry Christmas!

© Arfon Jones 2018. All images are copyrighted throughout the world.
Posted by Arfon Jones at 2:43 pm