“...Deep under Arfon’s studio lays an extensive collection of random artefacts thirty years in the making. His robotic assistant Omnibot has been assigned the mammoth task of excavating the collection. What will Omnibot uncover today...!” 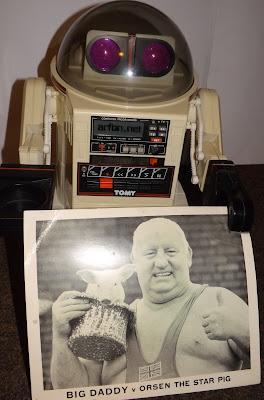 Omnibot discovered some great curios one of which is from 1987 when I was 8 years old and my father took us as a family to the Arfon Leisure Centre in Caernarfon, North Wales to see Big Daddy wrestle. I wasn’t a wrestling fan myself but I would watch ITV's World of Sport wrestling coverage (it broke the monotonous gap between No 73 and the A-Team on a Saturday) but being a ‘casual’ wrestling fan aside I was a child of the 80’s and so naturally knew whom Shirley Crabtree, Jr. AKA Big Daddy was. Standing 6ft 2 inches and weighing in at 26 stone (according the 1984 Big Daddy Annual) and armed with the biggest chest in Britain measuring 64 inches (according to the Guinness Book of Records) he was a regular face and name on television.
I remember being ushered into a dark, loud room filled with people. I could see the ring but only when the spectators remained in their seats (I eventually stood on a pool table in the corner) as we watched Big Daddy ‘fight’ equally famous Giant Haystacks (Martin Austin Ruane 1946 –1998), and to be perfectly honest I remember being somewhat underwhelmed by the event then my mother took me into the corridor. As I asked what we were doing there when a massive hand landed on the top of my head! I looked up to see who this hand, which seemed bigger than my entire head belonged to I saw a giant smiling down at me it was Big Daddy! He made his way down the narrow corridor and took a seat behind a small table at the end of it, on the table were three photos and my mother instructed me to pick one and I picked this one of him holding a pig and the big man then signed it. It’s a distant memory, vague in parts but that was the time I met Big Daddy. 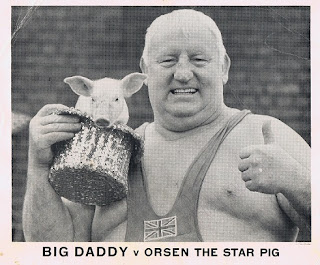 Not long after that he delivered his famous ‘Daddy Splash’ to Mal "King Kong" Kirk who sadly died shortly after and although an inquest maintained that Kirk had a serious heart condition which could have proved fatal at any given time Big Daddy still blamed himself and so went into semi retirement from wrestling as the UK turned its attention to the world of American wrestling on Sky Tv. Although people’s opinions seem divided on his actual contribution to British wrestling he was without a doubt a part of British life for a time because if he wasn’t popping up as a guest on something he would be in Buster or adverts promoting Daddies sauces. His very name would be used by others as a way to determine the size of something. I will always have this memory of him. Who ‘Orsen’ the star pig was I have no idea, let me know in the comments if you do! 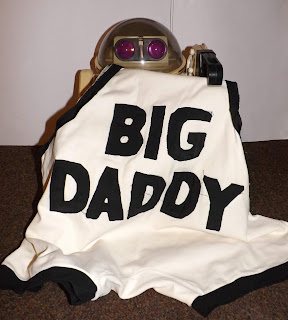 Omnibot also found this!
Following Big Daddy's death, some of his effects were put up for auction at Sotheby's on the 10th of July 1998 and one of those items was this very singlet, his name sown on (by his wife) we are now offering this magnificent piece of British Sporting memorabilia up for sale on the eBay page, follow this link to find out more and own a piece of history!
Proceeds help to fund my work.