"Wonderful chap. All of them" A Doctor Who 50th anniversary special 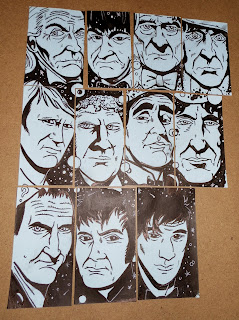 The amount of hype generated around Doctor Who’s 50th anniversary has been astounding! Between each tantalising still from Mark Gatiss' An Adventure in Time and Space to that epic Doctor Who: 50 Years' trailer. The special online episode The Night of the Doctor marking the return and departure of Paul McGann's 8th Doctor and the discovery of the missing Troughton episodes The Enemy of the World and The Web of Fear have had me, for want of a better expression “geeking-out” for weeks!  Funny how things can change in ten years though when you consider how for the 40th all we had was a weekend special on UK Gold and four alternative covers of the Radio Times to look forward to! (12 Radio Times covers this time round!) It was during the 40th anniversary that I first embarked on my mission to obtain as many Doctor and companion signatures as possible on my ‘Time Gentlemen 1963- ‘ painting. It hasn’t been easy, some continue to elude me a minor set back caused by the series’ global popularity. I’ve travelled many miles, made many friends and enemies along the way, encountered joy and hardship making it a real adventure, one that I have no intention of giving up on just yet. So, to celebrate the programme’s 50th anniversary and the project’s 10th I have created 11 hand drawn/painted replicas of each Doctor as depicted in the painting and scattered them through time and space… Who knows where they will end up?
Happy 50th anniversary Doctor Who!

© Arfon Jones 2013. All images are copyrighted throughout the world.
Posted by Arfon Jones at 9:00 pm