These are a few of my favourite things … that people made

I know many creative people and having written a review for my friend Lee James Turnock’s comic Honk! last week I thought I would write about other nice things that my friends have produced…

Morse Code Mitts
I mentioned these last year but seeing as I am wearing them as I type this entry I thought I would mention them again! I love Miriam’s work, I loved her ankle-less socks and I love these. On the left-hand you find (dot-dash-dot-dot) for 'L' and on the right-hand (dot-dash-dot) for 'R'. As Mim put it, “geeks will appreciate the joke and most other people will simply see a nice pair of mitts.” It can get a little chilly in the studio and my hands and fingers are the first to feel the cold, gloves can at times restrict movement, but not with these! Check out her blog for more details about them, a free knitting pattern and other general cool knitwear blogging! 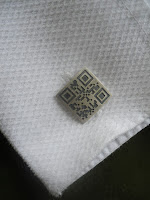 Infostatical Cuff-links
On the subject of amazing things that I have mentioned in the past lets not forget Jarkman’s fantastic QR sterling silver cufflinks! Apps for scanning codes on smartphones have made QR Codes more common place in recent years making them a fantastic promotional aid. So now thanks to these beauties I can send any owner of a smartphone directly to my home page with a flick of my wrist!  Check out Jarkman’s web site see the amazing way these were created and order some for yourself. You will not be disappointed!

Replica Yeti footprint
I’ve also mentioned Paul Glover’s excellent Bigfoot and Orang Pendek footprint casts in a previous post, this time I would like to showcase his replica Yeti footprints! Based on the Eric Shipton footprints found on the Menlung Glacier at an altitude of 18,000 feet in 1951. They are made from resin making them stronger and lighter than plaster casts.
Hang them on the wall, a guaranteed conversation piece.

Laser etched Nikola Tesla Souvenir of Wardenclyffe Vase
A Wondrous souvenir of Nikola Teslas Wardenclyffe Laboratory! Wardenclyffe Tower sometimes referred to as the Tesla Tower was Nikola Tesla’s early wireless transmission tower, which stood in Shoreham, New York until it was eventually demolished in 1907. Although it was never fully operational I still adore it and all that it stood for, in my wildest dreams I have a replica of it constructed on the roof of my home, much the same way as Blackpool created their own Eiffel Tower. My dear friend Andy Dingley of Your Laser. co.uk has created these 22cm high x 10cm x 8cm thick walled glass Wardenclyffe vases featuring Leo Blanchette’s illustration of the tower and Tesla's own handwriting etched on with lasers. Photos do not do this piece justice, (I know because I have tried to photograph it) after Andy very kindly presented Beth and myself one as a wedding gift! It has pride and place in our living room. This is but a small sample of Andy’s work, follow the links and look through his work, it’s marvellous.

Barry Barmcake ‘Never Mind the Bread Rolls’ & ‘Anarchy With a Uke Eh?’CD's
I’ve posted a few blog posts in the past about Neil Baxter and his work on "A Statue for Frank" and his Youtube characters Norman the Northern Zombie and the great Barry Barmcake. Barry Barmcake is from Wigan in Lancashire he loves Marmite, Bobcaps and going to the chippy but He also does ukulele covers of famous songs, such as ‘The Ace Of Spades’ and ‘Bohemian Rhapsody’. He recently produced two CD’s, ‘Never Mind the Bread Rolls’ & ‘Anarchy With a Uke Eh?’ which gave me a fair few chuckles. But all joking aside, Neil is a terrific performer so follow the link and find out more! 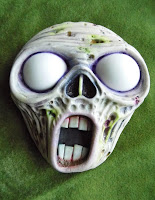 Blarg Nards
I first discovered David Rutter’s work on Deviantart interestingly David says that he’s not an artist and that he just makes stuff that people like. As far as I am concerned he IS an artist and a rather good one at that. You will soon be able to see one of his brilliant dolls heads in the up and coming independent horror film Torture Chamber until then I would like to bring his Blarg Nards to your attention. These 3” zombie face magnets which are hand made using Amazing Sculpt or Apoxie Sculpt 3" and had me harking back to franchises from my childhood like Boglins or Madballs. As I said, each one is hand made and has its own character and I dare you to look through the gallery and not pick a favourite.