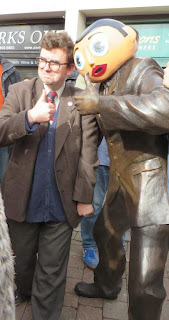 Frank Sidebottom always told us that Timperley was really fantastic and although I knew this to be true it has now been made official! I say this because on Sunday the 20th of October 2013 at 11:37am Timperley did something really fantastic, they unveiled a life size bronze statue of Frank Sidebottom in the centre of their village as a tribute to the great Chris Sievey, sadly lost to cancer in 2010.
My wife, daughter and I travelled up from North Wales to join the 1,000 other people, who had amassed on the streets of Timperley that day for the unveiling. There were also many reporters and camera crews there asking the public’s opinions.  Local councillor and one of the key organisers Neil Taylor told one of the reporters that the statue was going to put Timperley on the map and suddenly I found myself reminiscing back in 1988 when Oink! released their holiday special which contained ‘Frank’s Timperley Bike Race Game’ an intricately detailed map (drawn by Frank) of the village for readers to cut out and make a board game. This map forever remained in my memory and played a big part in my pilgrimage to Timperley for Frank's Magical Timperley Tour in 2006. When we joined the man himself on a tour of his beloved home seeing the sights such as Timperly Station, Timperley Aquatics (where I got Darwin the Tortoise, more on him in a future post!) and the two Timperley post-boxes!

The location selected for the statue was on the corner of Stockport Road (opposite the Stonemason’s Arms Frank’s “local”) marked by a Sidebottom-esque shed which the crowd formed around as we drew closer to 11:37. With so many people gathered, some of who wore Frank heads and with the brass band playing in the background I was reminded of the last time I was in Timperley when we marched through as part of ‘Frank’s Army’ in the 2011 Altrincham Festival. Raising awareness of the plan to raise the funds needed for getting the statue erected in the village. Being just as keen to make the statue a reality I tried to do my bit by donating my ‘The Indestructible Frank Sidebottom' artwork from the Frankophilia! Exhibition and the artwork used for last year’s ‘Franktastic Christmas party’ poster to the cause. 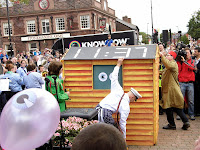 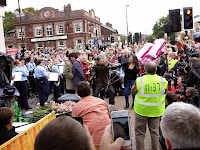 When the time came tributes were paid, a cheque for £1,137.00 was awarded to Marie Curie made up of what was left over from the statue fund before Chris’s friends and family moved in to take the shed apart in sections as the band played. The crowd looked on, as the sections came away like a large Frank themed game of ‘pass the parcel’ the statue was unveiled to glorious applause and camera flashes! The magnificent bronze statue designed by sculptor Colin Spofforth and made by Paulina Skavova in the Czech Republic perfectly captures Frank adopting a trademark thumbs up. A wonderful design that allows generations of people the opportunity to have their photograph taken with Frank and that’s just what happened once the railings were removed! We stepped back to allow the crowd to settle and caught up with good friends and fellow Frank’s Army troops Barry Barmcake and Chonkin' Les. I recently created the cover for their CD "A Statue For Frank" which was a follow up to their 2011 release "Let's Get A Statue For Frank" which also helped raise money for the statue appeal. They weren’t the only musicians amongst the crowd, Mike Joyce of The Smiths and Badly Drawn Boy where there too. Last time we saw Badly Drawn Boy was at ‘Frank's Fantastic Farewell’. As we moved closer in I was able to fully appreciate the work that had gone into this piece, I was delighted to see it become a reality and naturally I had my photo taken with it! The nicest touch had to be the plaque underneath which reads, “As Long As I Gaze On A Timperley Sunset, I Am In Paradise” a reference to his song ‘Timperley Sunset’ a cover of The Kinks' ‘ Waterloo Sunset’ song. We made our way back along the high street passing the points of interest depicted on Frank’s Timperley Bike Race Game twenty years ago adding the statue unavailing to my list of endearing Timperley memories made up of Magical Tours, Festival Marches and Christmas Pantomimes.
Its worth noting that no public funding was used in this venture, Frank Sidebottom fans paid for the statue, fans that wanted to remember this ‘one-off’, so all concerned should be immensely proud of what was achieved. If you are ever in Timperley be sure to check it out and see it for yourselves. 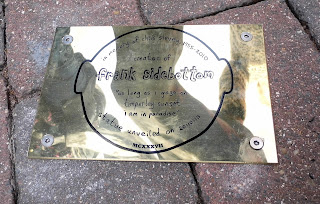 I doubt this will be the last Sidebottom related post I ever write for this blog there is still the 'Being Frank: The Chris Sievey story' documentary in production so the Chris Sievey/ Frank Sidebottom legacy is far from being over. But now at least, thanks to the efforts of all the Frank Sidebottom fan’s out there, there is a fitting tribute to his work which will very likely spark an interest in future generations to seek out his work and be equally inspired.

First photo cutesy of Martin Unsworth
© Arfon Jones 2013. All images are copyrighted throughout the world.
Posted by Arfon Jones at 5:43 pm