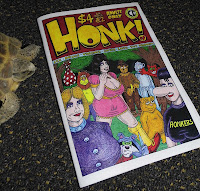 Occasionally something comes along that despite my not being involved with it I feel the need to tell others about it. My good friend, underground comix artist Lee James Turnock having a new comic out is one of those instances! Since discovering Lee’s blog I have followed his work with great interest. Much like myself he is clearly influenced by the works of Robert Crumb and although I am big fan of Crumb and his style I can only take so many stories about drugs and the 60’s, so Lee allows me the opportunity to enjoy that style of drawing and story telling but about issues that interest me, things such as  80’s television, The Goodies and Who Framed Roger Rabbit to name but three. So when I received HONK! in the post I was really looking forward to reading it, as is often the case with comics the work benefits greatly from being printed. Turning a page, feeling the paper on your fingers and ‘discovering’ the next page is far more interesting than scrolling down a screen and suits this type of comic and Lee’s style to the ground. The drawings are flawless, he has clearly poured his heart and soul into this work and I can only commend his attention to detail. As for the content I found the story to be entertaining and the characters maintained my interest throughout and I also ‘got’ all the references. One of the things that has always struck me about Lee’s work is the way he shoots the things he hates down in flames as he gives a nod and a wink to the things he loves, and this comic is no exception, as it deals with topics such as Disneyfication, Hooters and The Raccoons!
Please note this is and Underground Comic so ADULTS ONLY! Assuming you are an adult I advise you buy a copy and then pootle over to Lee's site and tell him how great he is, he won’t listen to me…