Well, here we are the 400th post AND on its tenth year! Ten years of wittering about things from the past and my humble career. At the time of writing this Blogger informs me that there have been 164,400 views made to this page in the past ten years- working out at around 1,133 Page views a month- so if you are one of those 164,400 thank you for visiting! I would like to especially thank everyone that has taken the time to write a comment (and it wasn’t SPAM) so thank you! So... the 400th- what shall we devote this post to? It’s normally an excuse to discuss events from my past that I almost certainly would have documented had I a Blog at the time, and then I had an idea- My trophy/curio cabinet. I thought I would share a few choice items and their back stories with you (some of which have been covered before but this might be your first time here...) So first up... 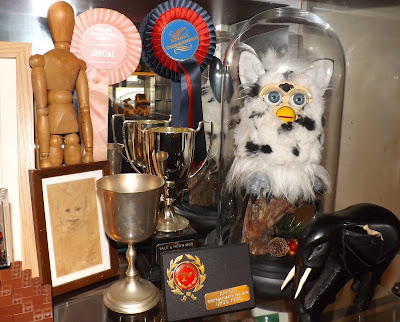 The Urdd is a Welsh youth movement that organises a range of different activities across Wales. Established in 1922 the Urdd was formed to give children and young people the chance to learn and socialise through the medium of Welsh. I was a member for several years and in 1990 I submitted a drawing of Godzilla fighting King Kong to their art competition and won! Sadly the drawing was never returned but I still have the trophy (complete with wonky plaque) which was presented to me on a bus as we returned home from an Urdd outing and was the first trophy that I had ever won for art, happy days.

Cursed Elephant
Objects that my mother forbade me from owning has been a topic of conversation before but I’ve never mentioned this before, a carved wooden elephant. When I was eight my family and I visited some friends spending their summer in a caravan, as we played outside I made an unusual discovery, just behind one of the breeze block supporting the caravan was this small black, wooden elephant. Curious about this small animal I took it inside to show my mother, the owner of the caravan recoiled from it and told us to not bring it inside, telling us that she had been given it as a gift and that it was cursed! Seems she had convinced herself that this object was cursed and thrown it under the caravan to be rid of it. Intrigued I asked if I could have it but my mother, being equally superstitious, if not more so forbade me to have it! The woman’s not so superstitious husband took it out of the caravan, and play resumed. However later on that day as we were leaving the husband, obviously playing a joke on my mother handed me a carrier bag with the elephant inside and told me to take it home with me but not show it to her until we got home. I did, and my horrified mother took the elephant from me and put it in the bin telling me to leave it be, and never touch it again…. Here it is, now on show in my curio cabinet.

Back row left to right

Highly Commended rosette, The Asylum 2010
Awarded to me at the Asylum event in 2010 when I entered the Patented Cryo-preservation Curiosity Cabinet into their contraptions contest.

Mounted Furby Trophy
For ten years I managed to steer clear of the sold-out Christmas toy scenario reminiscent of Jingle All the Way but one Christmas my preparation plans went somewhat awry and I found myself trying to locate a Furby two weeks before Christmas. It seemed to be that year’s ‘must have’ toy and as I searched the Internet I was struck by how many refered to the process as “hunting”. I would look through eBay sales and most of the sellers taking advantage of the rush would write “happy hunting” underneath their extortionate asking prices. In one instance I visited a toyshop and a staff member wished me “good hunting” as I left! So, I gladly excepted the challenge and went ‘hunting’ for a Furby and managed to successfully “bag” one of the beasts. Although it was in no way as comical as  Jingle All the Way I did however manage to successfully secure one a week before Christmas at a fraction of the cost and frankly I was quite pleased with myself. This feeling was highlighted and underlined by my daughter’s happy face on Christmas morning when she found Furby under the Christmas tree. True the memory of her happy face was reward enough, but I decided to mark that December ‘hunt’ the only way I knew how. 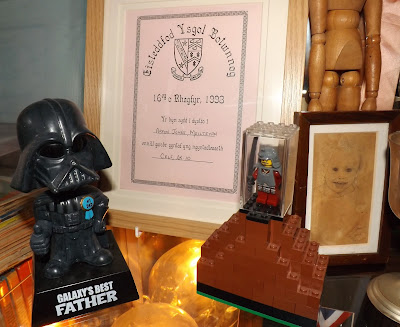 Galaxy’s Best Father
A Father’s Day award that I humbly accepted, Generally, I’m not overly keen on modern Star Wars merchandise as I feel that there is far too much of it and that we have seen it all before. But I rather like these Funko Wisecracks awards that not only appealed to my fondness of classic W&R Berries Co. figurines but also my sense of irony.

The Not-100-Videos-Contest Lego Samurai
Back in 2011 Ashens set the Not-100-Videos competition. Inviting viewers to submit artwork that celebrated his videos and I submitted ‘Stuart Ashen’s Poundland Peril’ which won first prize in the fine art category I won a fake PSP an Ashenthology dvd and (as he put it) “Bully's Special Prize” a Lego Samurai figure. Since winning this contest I have uploaded the image to my deviant art page and have since been asked on several occasions 1) did I actually receive the Lego Samurai? And 2) Have I still got it? I answer 1) Yes I did and 2) Yes I have, and here it is. Looking somewhat out of place among the trophies I decided to make it look more trophy-esque by constructing a trophy like base with Lego.

1st prize for the year 10 art category Eisteddfod Ysgol Botwnnog 1993
Although this particular prize was awarded for coming first in a school art competition I have long regarded it as a double victory. Let me firstly explain to those of you not familiar with such things, Wales has a national Eisteddfod an annual festival of literature, music and performance that dates back to around the 12th century, a sort of Art Olympics if you will. When I was at school they used to hold their own version of this Welsh institution with the three Houses trying to achieve as many points as possible and becoming the outright winner for that year. Pupils would convene in the assembly hall and watch the various performances, cheering for their respective House and during this particular year I and a few of my friends found ourselves sitting in the front row. After a few hours this had became somewhat tedious when one particular pupil stepped on and was, to be perfectly honest, ATROCIOUS indeed laughingly so, so much so that we couldn’t help but giggle, (childish yes but then we were children) and once his performance was over a teacher (remaining nameless for obvious reasons) whom had observed this ran over to us to put us in our place telling us “how dare you! At least he’s trying! What have you done? You haven’t contributed anything towards the Eisteddfod!” No sooner had she returned to her seat the headmaster took the podium and announced the winner of the year 10 art category... me. As everyone clapped I couldn’t resist glancing over at the teacher and exchanging a smug smile which was met with a scowl. 1-0 to me. 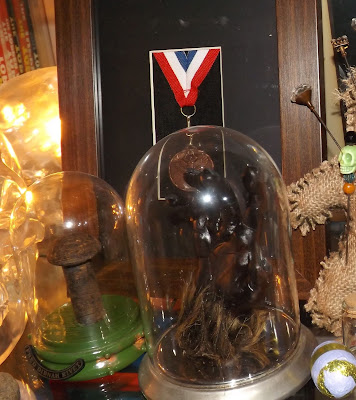 Fred Dibnah Rivet
I never actually knew Fred Dibnah but felt that I did having watched his documentaries over the years and when he died in 2004 I was sorry to hear of his passing, it was the end of an amazing life. When he was alive, Dibnah had hoped that his home would one day become a museum, where his life’s passions could be preserved and that’s just what happened, it is now the Fred Dibnah Heritage Center. Although I am yet to actually visit the famed yard for myself I do own this a genuine boiler rivet from his workshop! Adapting an existing vintage glass display dome with rivets (some with light rusting) and finished off with a miniature locomotive style nameplate created by Andy Dingley of Atelier Fabry-Pérot. A small tribute to the great man in my own studio/base of operations!
Back

Brunel award for Ingenuity, The Asylum 2009
Awarded to me at the Asylum steampunk event in 2009 when I entered the Cellular Condenser Ray- Gun into their contraptions contest. 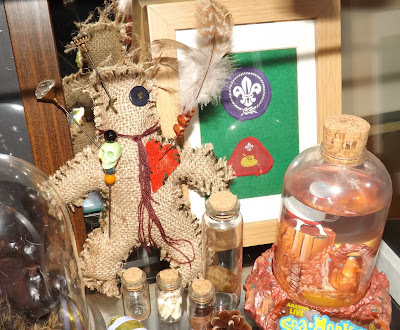 Voodoo Doll
I am not getting into that.

Cub Scout Artist Proficiency Badge
I was once a part of  Robert Baden-Powell’s legacy and proud of it. To achieve the Art badge a Cub Scout had to choose 3 of the 7 set proficiencies laid out in the Cub Scout Handbook, one of them was to “make a model from clay or plastic material” and I made a Plasticine model of Roger Rabbit.

That was fun, I might do another sometime. Missed anything? Curious about another item- leave a comment at the bottom! Thank you again for reading my posts these past ten years!

Email ThisBlogThis!Share to TwitterShare to FacebookShare to Pinterest
Labels: Takin' Care of Business, Wonderments and Atrocities