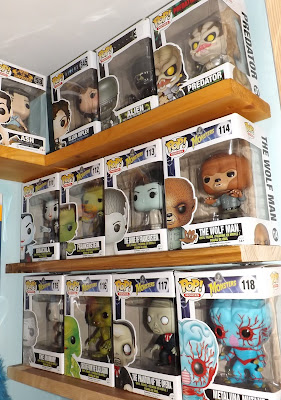 Of course I am not really an addict; I can quit any time I want to! But if Funko should read this- Aside from re issuing Indiana Jones and Ace Ventura figures, here are some that I would like to see produced, the classic King Kong from 1933, Gamera, Jack Nicholson’s Joker, Danny DeVito's Penguin, Michelle Pfeiffer's Catwoman, Tommy Lee Jones's Two-Face, Jim Carrey's Riddler, Arnold Schwarzenegger's Mr. Freeze, Uma Thurman's Poison Ivy, Captain Planet, Red Dwarf, Columbo, The Mask (movie), Dumb and Dumber, Colonel Sanders, Ronald McDonald, Burger King, Hooters Girl, The Crypt Keeper, ALF, Inspector Gadget, Married With Children, Jurassic Park, The Addams Family, Men in Black, Lynda Carter's Wonder Woman, The Terminator and Gort...

© Arfon Jones 2018. All images are copyrighted throughout the world.
Posted by Arfon Jones at 3:58 pm