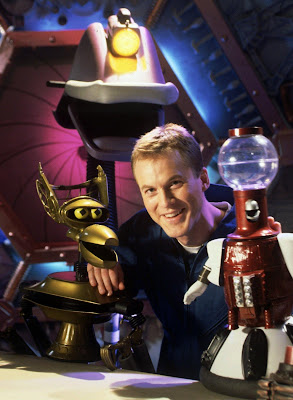 Continuing the trend of up-beat posts, this post is devoted to two adventures Mrs Jones and I embarked on a few months back, BUT first a back-story...Back in the day Mrs Jones told me about a movie I had never heard of called, Mystery Science Theatre 3000: The Movie which seemed to follow a simple enough premise, a mad scientist sends a man into space as part of an experiment, forcing him to watch the worst 'B' movies ever made, aided by a group of robot friends they can be seen in the bottom right of the screen while the movie plays as they heckle or 'riff' (“A monologue or spoken improvisation, especially a humorous one, on a particular subject”- oxforddictionaries.com) the movie. “You’ll love it!” she said, “They make fun of This Island Earth!” well, being rather fond of This Island Earth I went into this movie rather apprehensively but by the end of it I can honestly say that I hadn’t laughed so hard during a movie in my life! It didn’t really make fun of the movie, if anything there was love there for it and the humorous observations and references added an extra layer to an already great movie. Shortly after that I astutely discovered that the reason it was called 'the movie' was because it had in fact started out as a TV series which ran from 1988 to 1999 clocking up an impressive 197 episodes! Created by/ starring comedian, Joel Hodgson it first ran on KTMA in Minneapolis, Minnesota before moving to Comedy Central and ending its days on The Sci-Fi Channel. Then after 100 episodes Joel left the series and was replaced by Michael J. Nelson (he also starred in the movie, essentially where we came in) The show was produced by very (very) funny people such as Trace Beaulieu, Josh Weinstein, Jim Mallon, Kevin Murphy, Frank Conniff, Mary Jo Pehl, Bill Corbett, Paul Chaplin, and Bridget Jones Nelson but being a cult show in America it's was largely unknown here in the UK but I urge you all to do as we did, seek out these episodes! The program is certainly one of my all time favourite television shows and it features some of my all time favourite robots and mad scientists and it introduced me to countless movies that would have otherwise been unheard of or forgotten (some of which might have been for the better) and suffice it to say this show has been a large feature in my life these past 14 years! Although the show had ended in 1999 most of the cast remain in contact and continue to “Riff” in some form or another in live shows across the US and during the past 14 years all we could do was look on with envious eyes.... hoping that one day, in the not too distant future, we would get to experience the MST3K experience. 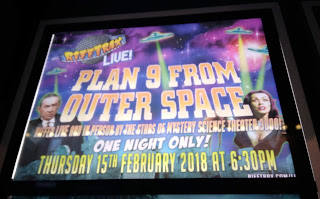 2018, the 30th anniversary year was that year! RiffTrax started back in 2006 and it’s a very clever idea, Mike J. Nelson, Kevin Murphy, and Bill Corbett sell audio MP3 file voice tracks of themselves making jokes (much the same way as they used to do on the show) once you have downloaded the track you find a copy of the movie they were watching on disc or streaming service and sync the two together and you get a hilarious commentary track on all the big budget movies with no legal issues for them, and they are hilarious! Equally hilarious and popular are their live shows and when we saw that they were going to riff Plan 9 from Outer Space and Samurai Cop live and for one night only at the Prince Wales Cinema, London on February 15th we couldn’t believe our eyes! Valentine’s Day was sorted! Having booked well in advance we showed up at the cinema to pick up our tickets before going around the corner to China Town for a meal at the Gourmet Kitchen we were giddy with excitement, we would finally see these guys live and when we joined the line you could tell that we were not alone on this! Mrs Jones tugged on my arm when she spotted Mike Nelson in the foyer and then Kevin Murphy, Tom Servo himself came outside to shake hands and thank everyone for turning up, we were both “geeking-out” at this stage.
When the doors opened at 6:30 we took our seats and they took to the stage to a great round of applause before starting the show with an educational short entitled The Calendar: How to Use It before going headlong into a colourised version of Plan 9 from Outer Space a movie, another move that I am rather fond of, I am a big Ed Wood Jr. fan and unfortunately Plan 9 is often cited by lazy journalists as “the worst movie ever made” trust me, it’s not and these chaps concurred (they have made a career of watching bad movies so they would know!) the show was hilarious! I have been to several comedy shows over the years but I don’t think I have ever heard so much laughter at one before. The show was over before we knew it, and it was a surreal experience, having listened to these guys for over 14 years and to finally see them on stage, in person was an experience. 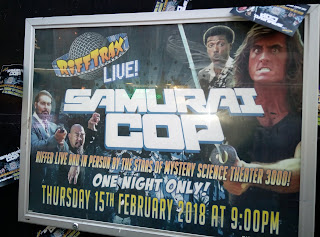 We got up, stretched our legs and took to our seats again for the second part of our double bill Samurai Cop from 1991 starring Robert Z'Dar, Matt Hannon and Mark Frazer which I hadn’t seen before, which was excellent as its quite an insane film in itself and so combined with the riff it was hilarious! As we made our way out of the cinema I wandered over to the main desk and enquired if the RiffTrax guys were signing autographs? The girl just waved me away and dismissed me with a “no” we shrugged and thought that was it, at least we got to see them live and on stage but when we walked through the door onto the street there they were! The three of them signing autographs, meeting greeting and taking ‘selefies’ so we got to go up, shake hands and thank them for their humour, their talent and for all the years of laughs in person, and they didn’t disappoint, they were as friendly and humble as we had been led to believe. The show (as I stated before) was hilarious and IF they should come back to the UK again I urge you to check it out! That was it, we got to finally meet the crew of the satellite of love and we wandered off smiling, quoting various lines to the Tube station. But that wasn’t the end, oh no. The cogs at Gizmonic Institute were turning, we would soon be returning to London for phase 2...

© Arfon Jones 2018. All images are copyrighted throughout the world.
Posted by Arfon Jones at 2:28 pm