The Last Drive-In with Joe Bob Briggs: The greatest live show I (sorta got) to see! 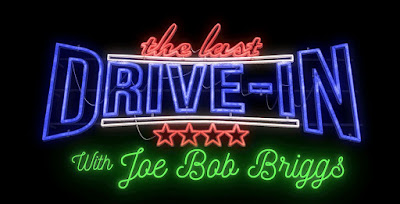 You will recall previous post The Last Drive-In with Joe Bob Briggs: The greatest live show I (didn’tget) to see! Well this is a follow up because I have since (as the title suggests) ‘sorta’ seen it.  As a UK JoeBob Briggs fan I had hoped to watch his triumphant return live via a live stream on Shudder but alas this was not to be, legal issues regarding some of the movies he covered meant it was only available to US customers, but Shudder UK was finally able to drip feed a few to us a week later, OK it wasn’t live and in its entirety BUT at least we did get to see some of them!  His appearance on the channel was such a huge success (it broke the internet!) that they have since announced that Joe Bob will be returning to our screens later in the year! 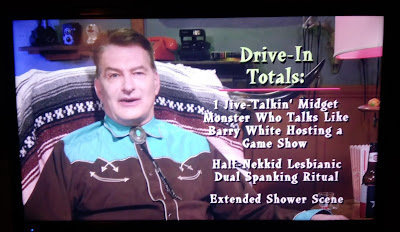 Well, American screens for sure but  this Shudder customer hopes that the channel, now armed with all this additional information regarding the Joe Bob fan base will provide ALL its customers the opportunity to experience his live show LIVE! And in its entirety! As I said we are still waiting on the remaining episodes Tourist Trap (1979), Sleepaway Camp (1983),Rabid (1977), Daughters of Darkness (1971) Pieces (1982) and The Prowler (1981) I e-mailed Shudder UK on the 21st of July to ask if we will actually get them the reply I got was “We hope so!” so until it happens I thought I would share some of my highlights from The Last Drive-In with Joe Bob Briggs we have been able to watch...
So come on Shudder, get it sorted and let us see the rest of this show! 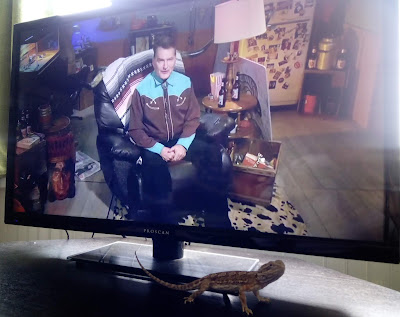 © Arfon Jones 2018. All images are copyrighted throughout the world.
Posted by Arfon Jones at 8:55 pm