The Last Drive-In with Joe Bob Briggs: The greatest live show I (didn’t get) to see! 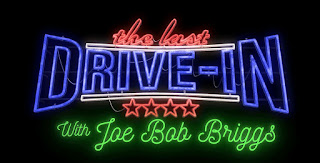 When I first enrolled in Art College in 1996 I was granted access to one of the greatest libraries I had ever seen! Offering access to thousands of books relating to art and design and the college also offered various courses in media and performing arts and so there was  all manner of books and magazines devoted to cinema on hand which provided me with endless amounts of reading material for my daily 30 mile commute to college. Books devoted to animation and cult cinema were a particular lure for me and I read about the works of people such as Ed Wood Jr, Russ Meyer, Roger Corman and Lloyd Kaufman. One book I held in high regard was Joe Bob Goes to the Drive-In a humorous movie guide written by Joe Bob Briggs that both celebrated the iconic American Drive-In appealing to my fascination with all things Americana and exploitation and B Movies of the past. Joe Bob seemed to speak to me, reviewing the then current movie releases through a tall tale about his exploits at the Drive-In all the while upholding the all important three B’s rule  "Blood, Beasts and Breasts!" as I noted the movie titles he had advised me to  “check it out” I had no idea who Joe Bob (aka John Bloom) actually was beyond the blurb in the book and certainly had no idea that he was the host of TNT cable network’s  MonsterVision series, regarded by many to be a cult classic. 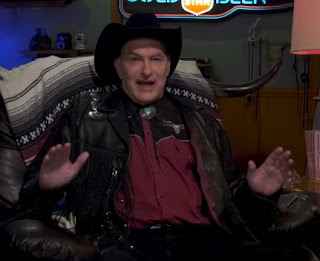 I didn’t even know what he sounded like until we had YouTube when I was finally able to put a voice to the words and face and binge watch segments from his past shows, combine his immortal 'Drive-In Totals' and his infectious devotion for the subject matter I have long regarded him to be one of the all time great horror hosts and B Movie/ exploitation cinema aficionado. But each time I watched these clips I was always sorry that we never had this guy here in the UK, celebrating the movies that mainstream critics and reviewers looked down on. So when I heard that eighteen years after his MonsterVision show had ended he was going to return for one last hurrah on Live stream I thought I was finally going to get experience Joe Bob Briggs experience for myself! First hand!

When news of the The Last Drive-In broke all fans rejoiced, it was to be a 24 hour marathon on Shudder the streaming/ subscription video on demand service on Friday the 13th of July and it was to be  Joe Bob in his chair, beer in hand highlighting some of his favorite movies over the years, ones that upheld the MonsterVision rule, “Anybody can die at any moment” but, my heart sank when it seemed that it was only available to Shudder customers in the US (due to copywrite issues) “dang it!” but when I looked on the Shudder UK site in the lead up to it, the show featured in its listings, so I figured I still had a chance! So I signed up to Shudder and took my seat at 3am but.... Shudder had underestimated Joe Bob’s popularity, they broke the internet! Hundreds despaired (myself included) as they only got loading screens! After an hour I walked away and decided I would try and catch up after I had some sleep, but I did contact Shudder themselves before going to bed asking what was going on and within a few hours  Shudder contacted me and said, “Hi there, The staggering demand for Joe Bob’s Last Drive In had temporarily overwhelmed Shudder devices. Things have been fixed and you should be able to join the live-stream in progress. Even better, we’ll be posting the entire Tourist Trap with Joe Bob’s commentary so you can catch up. And on top of it all, we will rerun the marathon in its entirety later next week on ShudderTV We apologize for a frustrating experience this past evening, but we THANK YOU for your tremendous support and fandom!” Well, there we go I thought I should be able to be a part of this at some point then? Nope! I tried with my TV, computer and phone throughout the day- no joy! All seemed even bleaker when I noticed that Shudder has issued the very same message I had been sent to everyone on Facebook! The 24 hour marathon drew to a close and I hadn’t seen a single second of it! Everyone heralded it as his triumphant return! One of the single important horror experiences in many a year! And I missed out!! I e-mailed them again, asking why had I not been able to join in on all the fun and games and essentially fobbed off? They replied “Dear Arfon, Unfortunately the marathon was available to US members only. We sincerely apologize about this inconvenience.” So it was all a waste of time?! Why advertise it on the UK site?  I’ve asked around and apparently according to a gentleman called Tom Waller who had been in contact with the channel before the show went to air offered some insight, apparently UK customers would be getting VODs (Video on demand) sometime during the next week but only for the films that Shudder have licensed for in the UK, so no Tourist Trap, Pieces or Sleepaway Camp! 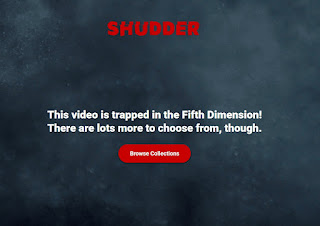 But there might be a glimmer of hope, we might possibly get to see the Joe Bob segments themselves edited much like the ones we have been watching on YouTube all these years (not what I was going for but at least it’s something!) Tom thought it would be an idea to contact Shudder UK direct and show them Joe Bob also has a fan base here in the UK and I agree! So come on fellow British Mutants, contact Shudder and tell them we want to see Joe Bob! Contact them via their contact page or their Facebook page or Twitter and remember, the Drive-In will never die!

UPDATE: 18/07/2018 I received this message from Davidson from Shudder Support, “ Hi Arfon, Thanks for the email and sorry for any confusion. In the near future, we will have most of the movies with Joe Bob Briggs’ commentary available for our UK subscribers. There are a couple films that we were not able to get the rights to in the UK, and that is why it was not originally available in the UK."