Believe it or Not: A Day and an Evening with Richard Wilson 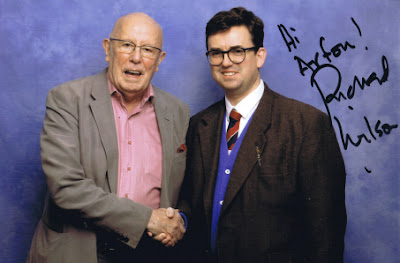 1990 I switched on the small portable telly that I had in my bedroom, keeping the volume down to a bare minimum so, as not to let on that I was secretly watching television on a school night. I left it on BBC 1 as a new sitcom started. It stared the actor that played the doctor in Only When I Laugh playing the part of a man laid off from his job and his attempts at finding  new work and the madcap things that happened to him, I became an instant fan of the show. That actor was Richard Wilson and the programme was of course One Foot in the Grave. Throughout the 1990’s Victor Meldrew and his catchphrase (of which I shall attempt to refrain from using in this post) become a part of British culture and a constant fixture for me. I would constantly re-watch recorded episodes, quote favourite lines and even had the Adesso remix of the theme featuring Eric Idle and Richard Wilson that I would also play continuously! Of all my favourite 90’s sitcoms Red Dwarf, The Brittas Empire and Bottom, this show had an advantage, my parents liked it and so we would all sit down to watch it together downstairs, as a family. But after six series and nine specials latter, writer/creator David Renwick decided to call it a day and killed the character off. I never stopped watching the repeats and with each viewing my opinion of how much of a great actor/comedian Richard Wilson was would be strengthened. I love everything he has done, and remember being delighted when it was announced that he was to be in the new series of Doctor Who. So imagine my thrill at finally having the opportunity to meet the great man this year at the Autographica event in Heathrow and thank him in person for all his great work. As I expected he was a warm, friendly and very funny man and our meeting was the icing on a cake made up of the layers of the before mentioned memories, simpler times and evenings in with my family.
On the way home from the Autographica event I rambled on about how much I would love to see a One Foot in the Grave episode being recorded. Something along the lines of… How fortunate I had been to (eventually) attend a Red Dwarf recording back in 2011 but how sad it was that Rick Mayall’s untimely death in 2014 put an end to the prospect of ever seeing an episode of Bottom being recorded. How much I hoped that The Brittas Empire would return (at the time of writing this there were rumours!) coming back to One Foot in the Grave I underlined my brilliant idea… Seeing that it would never return as a series (with main character being dead and all) how brilliant would it be if Richard Wilson played Victor in a one-man show?

One week later, it was announced that Richard Wilson would be playing Victor in a one-man show for one night only at Sheffield's Crucible Theatre on the 23rd October! (If only there was a popular catchphrase that I could use to sum up my disbelief!).
So on the 23rd October; Mrs Jones and I attended ‘An Evening with Richard Wilson’ a special fundraising event organised to raise money for Sheffield Theatres (of which Richard Wilson is Associate Director). He stepped out to a packed house and performed ‘The Trial’ (one of my favourite One Foot in the Grave episodes!) A solo episode that sees Victor on call for jury service trapped at home on a wet day enduring boredom. Having seen this story countless times, seeing him performing dialogue I have committed to memory it was a wonderfully surreal experience. Hearing people all around you laughing at a Yucca plant in a toilet and Toupée in a loaf elevated the story for me. Mr Wilson was brilliant, we had a fantastic time. A Q&A about his career and his most famous character conducted by Artistic Director at Sheffield Theatres, Daniel Evans (who also appeared in the Doctor Who story  ‘The Christmas Invasion) followed after. The script used for the performance sold for £700 in a silent auction with all proceeds going towards the preservation of this wonderful theatre that prides itself on being as they rightly put it, a “thriving cultural landmark in the heart of the city”. The event managed to raise around £17000! 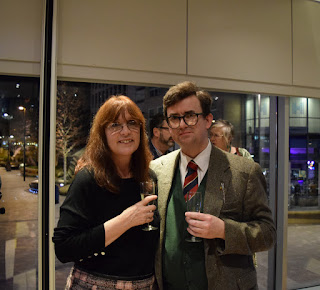 We rounded the evening off at the VIP after show drinks reception and once again had the opportunity to catch up with the great man and tell him how brilliant he is. We had never been to the Crucible Theatre before, perhaps better known as the home of  World Championship snooker. Both Mrs Jones and I were suitably impressed by this magnificent Grade II listed theatre. I can’t stress how much you should visit this place, they have a wide range of performances and pride themselves on making them available for everyone to enjoy. Check out this link and see what’s going on and show your support, we may very well see you there as we fully intend on returning.
So that was the time(s) I met Richard Wilson. To finally have the opportunity to meet him was amazing, but seeing him twice in one year? well I just don’t believe it…

My sincere thanks to everyone at the Crucible for arranging such an amazing evening and Claire Murray for the photos.