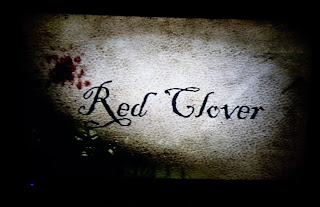 We have strayed quite a way from the usual Holiday themed horrors involving a psycho killer for St Patrick’s Day this time round.  It was suggested that I watch Leprechaun (1993), but Leprechaun hasn’t much to do with St Patrick’s Day BUT that wasn’t a problem however as there is a killer Leprechaun movie that takes place on St Patrick's Day for our convenience! A made for television horror film directed by Drew Daywalt called Red Clover from 2012, originally with the title of St. Patrick's Day Leprechaun (would have been better suited for this challenge!) the title was changed to Leprechaun's Revenge when it aired on the Syfy Channel but switched back to Red Clover for its DVD release! It all starts kicking off in fictional town of Keening, Massachusetts.  While out hunting Karen O'Hara (Courtney Halverson) picks a red clover, releasing a deadly Leprechaun which starts picking off citizens as they prepare for their St Patrick’s Day celebrations (eating gold as it goes about it). We find out that this Leprechaun had been previously banished by the town’s folk for similar reasons and so it’s up to Karen to put it back where she found it, aided by lucky horseshoes and her town drunk grandfather (William Devane) and town sheriff father played by Billy Zane. The film maker’s decision to distance itself from the traditional Leprechaun depictions more associated with Warick Davis’s version by having the creature appear more goat like gives the story more of a Cryptozoology feel, which I felt was reminiscent of another Syfy Channel movie, Chupacabra: Dark Seas (2005) which I also liked. As previously said, quite a detour from our usual themes and perhaps not as well known- but a lot of fun, be sure to check it for out for yourselves next year, until then I’ll see you back here for Mother’s Day!

© Arfon Jones 2019. All images are copyrighted throughout the world.
Posted by Arfon Jones at 4:51 pm