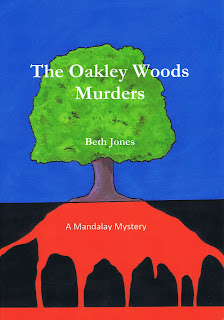 Remember last year when I told you that Mrs Jones had released a new book entitled, Strange Times in Little Happining? I had the honour of illustrating it for her, the book has been very well received by readers, so much so that she’s written another and yours truly got to illustrate that one as well! Inspector Mandalay and the eager Sergeant Barnes return to be baffled once again by a strange series of grizzly murders in Little Happining.  What is the link to Oakley Woods and is the murderer a man..or a monster? Find out by ordering your copy either via Amazon or the Mandalay Mysteries website.

On another note, Beth’s books made this week’s Cambrian News, in an article entitled; Beth’s cosy crime fiction offers an escape from life’s stresses. Beth Jones has written the second book in her Mandalay Mysteries series... A Nefyn author who says her inspiration for writing is a desire to entertain and amuse, has released another book. Beth Jones, 57, feels that escapism is very important in today’s  stressful world. That’s why she keeps her writing light-hearted and, to some extent timeless.  Beth said she felt that nobody was writing the sort of books she enjoys nowadays – So she decide to write her own. Her love of rural village life is the basis for her writing, and her settings are a mixture of the Kentish villages around where she grew up and the villages of the Llyn Peninsula where she has spent the last 30 years. Her books are aimed at anyone of any age who loves a good old fashioned murder mystery, and anyone who wants to escape for a while to a world with old fashioned values where strange things happen and policeman eat a lot of cake. Beth grew up in Beckenham, Kent and moved to North Wales in her late twenties. Her love of crime mysteries began at an early age, when she started the 'Famous Five Fan Club' at primary school, being an avid reader of the books. By the age of ten she was reading Sherlock Holmes and a few years later she discovered Agatha Christie and was hooked on the genre. TV detectives also have a place in her heart, from the 1970's Ellery Queen adaptations to Colombo, Murder She Wrote and on to Morse and Midsomer Murders, with many others in between. 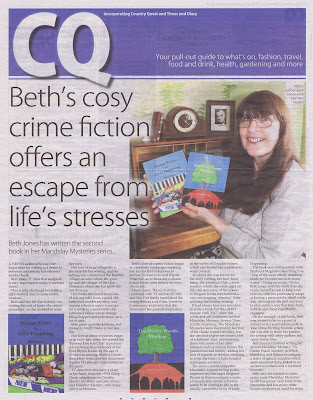 Beth's love of Science Fiction began at a similarly young age, sneaking into her brother's bedroom to borrow 'Starman Jones' and 'Beyond Tomorrow', as in those days Science Fiction books were strictly for boys, she recalls.  These classic 50's Sci Fi stories combined with TV such as Dr. Who and Star Trek firmly established the young Beth as a Sci Fi fan, however it was many years later that she discovered her greatest inspiration in the works of Douglas Adams, which fuelled her ambition to write comedy.


At school she was known for her story writing, her first 'book' being 'The Adventure Club' a short mystery which she wrote aged ten. She also sent some of her poems to Penguin books and received a very encouraging 'rejection' letter advising her to keep writing. It had always been her intention to write a book but this didn't happen until 2017 when she wrote and self-published the first Mandalay Mystery, 'Strange Times in Little Happining'. The Mandalay Mysteries were inspired by her love of the classic murder mystery, but she decided to give her stories a bit of a different slant, interweaving them with some of her other interests such as Science Fiction, the Paranormal and history, adding her love of comedy to the mix resulting in what she terms 'a light hearted cross-genre mystery'. The first  story concerns Inspector Mandalay, a peace loving police Inspector and the eager Sergeant Barnes as they investigate a series of inexplicable events as History seems to be coming to life in the usually uneventful town of Little Happining. The book was well received, with Starburst Magazine describing it as 'One of the most utterly charming reads we’ve come across in many a year.' Going on to say, 'As for Beth Jones, with her work here she marks herself as one to keep your eyes on, with her particularly adept at having a great eye for detail while also allowing for the plot and story to play out in a way that feels fresh, natural and, most importantly, engaging.' On the strength of this book, Beth was invited to be on a panel of writers at last year's Morecambe & Vice Crime Writing Festival, where she was able to share her passion for writing with other authors and Crime Fiction fans.
Beth has just finished writing her second Mandalay Mystery, 'The Oakley Woods Murders', in which Mandalay and Barnes investigate a series of grizzly murders which seem somehow to be linked to an ancient woodland and a mythical monster. Beth said she intends to write many more Mandalay Mysteries as she has grown very fond of the characters and has many other bizarre mysteries in mind for them.

So there you have it, either order your copy of 'The Oakley Woods Murders' on Amazon or direct via the Mandalay Mysteries website, tell her Arfon sent you!


UPDATE 1/11/2018: And as if that wasn’t enough to convince you to buy it she also received a 9 star review from Starburst Magazine adding, “With her two Mandalay Mysteries to date, author Beth Jones has crafted a world that is so simple but so wonderfully told that is has you eagerly turning page after page after page. Sure, there’s a great story at the centre of The Oakley Woods Murders, and there are certainly a few twists to this particular tale, but, as with Strange Times in Little Happining, it’s often the minute details that impress just as much as the greater narrative. When it comes to description and scene-setting, Jones is proving herself to be an absolute matter, with the quaint and warm Little Happining and its characters given depth rarely seen in such a swift and breezy read” and “We described the previous installment of Mandalay Mysteries as a hidden gem, and that is again the case here. For sheer storytelling, Beth Jones is marking herself out as a major talent just waiting to be discovered by a wider audience. In fact, her two adventures to date have a warm sheen to them that wouldn’t feel out of place told in a family-friendly daytime TV mystery. Part Midsomer Murders, part Scooby-Doo, all beautifully constructed in a wondrous anecdote that will instantly pull you back to a more innocent time when the little things mattered, delicate details were appreciated, and we were all a little less cynical and grumpy.”

© Arfon Jones 2018. All images are copyrighted throughout the world.
Posted by Arfon Jones at 10:56 am