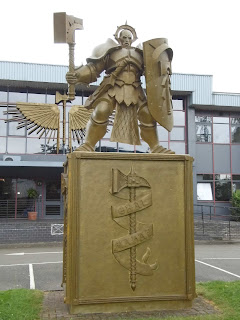 Games Workshop, a world famous publisher of wargames and role-playing games and a brand that I have been familiar with most of my life, be it in the model shops that I frequented, seeing their product ranges in magazines and catalogues I read or their stalls at the conventions I visited. Yet, with the exception of HeroQuest and Space Crusade I had never directly supported them, but not intentionally I might add! I really wanted to as it had all the makings of something I would have been 'into' but (much like Dungeons & Dragons) I didn't know anyone else that was 'into' Warhammer and so it never happened. This didn't stop me from admiring them however, despite the stories and characters being lost on me it never stopped me from admiring the miniatures and the way they were painted and that's why I was excited to learn that there was an actual Warhammer Museum at GamesWorkshop's global visitor centre! I visited last year and deliberately left it off my '2016 New Years blog post, thingy' as I thought it was worthy of its own post. So without further ado... 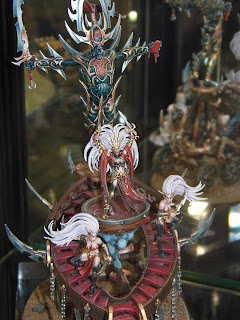 The global visitor centre is located at Games Workshop's base of operations in Nottingham featuring three retail stores including the world’s only Forge World and Black Library stores selling a range of exclusive merchandise and miniatures there is even an events hall made to resemble a castle courtyard filled with gaming tables which are free to request, reserve and use where regular tournaments are held highlighting how much of a social event Warhammer is, as several tables had players setting up on them. Even eating keeps within the Warhammer theme as players can stop off for a drink and a bite to eat at Bugman’s Bar (I understand it is named after the greatest dwarven brew-master) dressed up to look like an old tavern (be sure to try the Bugman Burger) where players can discuss the franchise over a flagon of ale (or coke). After a very nice lunch we turned our attention to their terrific museum open to anyone for a very reasonable entry fee. the exhibit starts with several cabinets of classic Citadel miniatures documenting the company's humble beginnings as a bedroom mail-order company first formed in 1975 that is guaranteed to have visitors saying “I remember that one” a few times, before opening up to 4 exhibition areas packed with thousands of Citadel and Forge World miniatures. 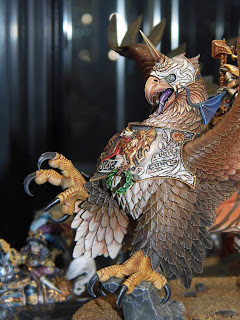 The miniatures have been painted by the renowned ‘Eavy Metal, Army Painter and Forge World teams. It has 17 specially built display boards featuring over 20,000 miniatures that are regularly changed showing off the work of guest displays with miniatures painted by members of the painting community. All rounded off by the impressively vast 'Battle For Angelus Prime' The biggest display board Games Workshop has ever created which is impossible to not be blown away by! I had a very long wander around the exhibition, as I said the stories and characters were unknown to me, but I still derived just as much pleasure from examining the details and marvelling at the little ad ons and the artist's abilities, it really is an art exhibition worthy of a visit and I urge you to seek it out. 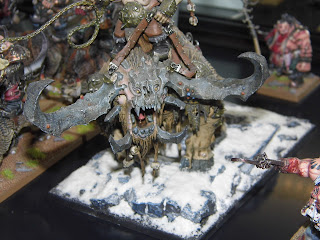 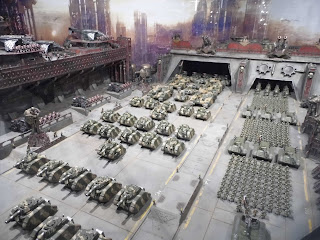 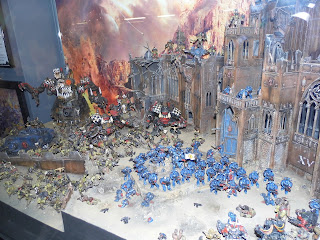 © Arfon Jones 2017. All images are copyrighted throughout the world.
Posted by Arfon Jones at 1:46 pm