Dine out before they die out: Little Chef Dolgellau/ Builth Wells

The A470... the major long-distance road in Wales that stretches from Llandudno to Cardiff, 186 miles long, it is quite possibly my least favourite road to travel on. Although it passes through two of Wales' national parks, Snowdonia National Park and the Brecon Beacons I find that its' narrow, single carriageway winding roads become very tedious after a time, more so during busy holiday periods! Nevertheless, I braved it in order to add two more Little Chefs to my list, this time Dolgellau and Builth Wells. 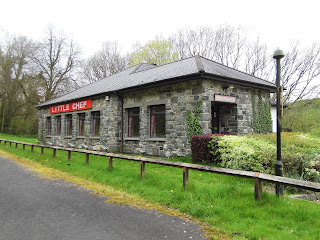 Dolgellau, Mile End Services, Dolgellau, Gwynedd LL40 2AB. An infrequent stop for me over the years as I was rather partial to their Jubilee Pancakes (first introduced to the menu in 1977) situated within the Snowdonia National Park, this restaurant was popular with mountain bikers, ramblers, photographers and countless holidaymakers, you will note that I said “was” in that sentence, Dolgellau Little Chef ceased trading in March 2017 and I have been informed that the entire brand will be a thing of the past by 2018. At the time of writing this post Dolgellau Little Chef is being refurbished and due to be reopened as a new Starbucks. 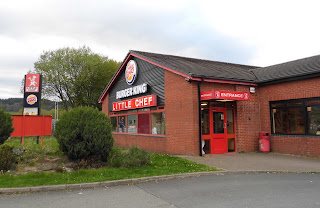 Llanelwedd, Builth Wells, LD2 3SS. Located on Station Road, Builth Wells the official Little Chef site (which once again advertises the wrong opening times) invites us to “pop in for a cuppa with our friendly local team” and once you have done that they suggest that you, “go see the towns mascot, the Black Bull known to the locals as ‘The Builth Bull’, or if you fancy travelling slightly further afield, why don’t you take a trip to the beautiful Elan Valley Dams or visit the Red Kite Feeding Station, Gigrin Farm”. First opened in 1987 this Little Chef is particularly dear to me, because between 1988 and 1994 my family and I would brave the A470 and travel South to visit Builth Wells each year for the Royal Welsh Show, one of the largest agricultural shows in Europe and so would be regulars at this establishment in the evenings and each time my brother and I would compete against each other, if we ate ALL our food we would be given a lollipop by the waitress! I was awarded many a Little Chef lollipop for cleaning my plate at this place I can tell you!
A classic Little Chef, it has actually been sharing its premises with a Burger King since 1999. My wife and I stopped off for lunch, still largely a Little Chef, it is strange seeing people eating Flame Grilled Whoppers when there isn't enough seating space in the Burger King section. Mrs Jones had the Royal Breakfast (the classic Olympic breakfast “crowned” with a griddled 6oz sirloin steak) and I had Chilli Con Carne. Having enjoyed my lunch I was able to chat with two ladies working there, Nora and Myra who have been at the Little Chef since 1988! So it is in all likelyhood both these ladies would have at some point awarded me a lollipop one time for cleaning my plate! And this time round was no exception! 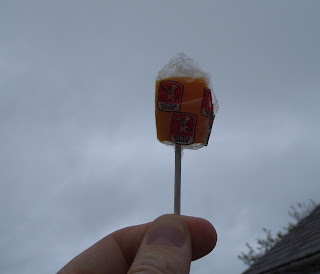