Wonderments and Atrocities: Fragment of the ‘Chained Oak’ 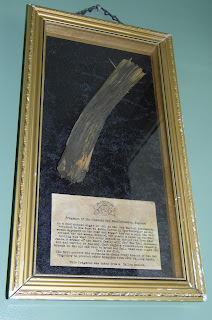 The newest piece to be added to my museum of Wonderments and Atrocities! I have covered the story of the Chained Oak in more detail in my ‘The 199th blog post special!’ mentioning how I had been fascinated by the legend and how I had been to see it for myself having been to Alton Towers. The Hex attraction inspired by the tale didn’t disappoint, I was especially taken by the little details hidden throughout the attraction. Preserved in this ‘distressed’ glass frame is a souvenir from that visit a fragment of the tree! The accompanying label (bearing the Earl of Shrewsbury’s Coat of Arms) reads,
Fragment of the ‘Chained Oak’ Staffordshire, England. On a cold autumn night in 1821 as the 15th Earl of Shrewsbury returned to his home at Alton Towers in Staffordshire an old woman appeared in the road and begged him for a coin. The Earl refused the old woman. Scorned, she placed a curse on the Earl telling him that "For every branch on the Old Oak Tree that falls, a member of the Earl’s family will die." The Earl dismissed her and carried on his way. That night a violent storm caused a branch on the old oak tree to break and fall, that same night the Earl’s son died.
The Earl ordered his servants to chain every branch of the Oak together to prevent other branches from ever falling again. This fragment was taken from a fallen branch.

© Arfon Jones 2015. All images are copyrighted throughout the world.
Posted by Arfon Jones at 6:33 pm