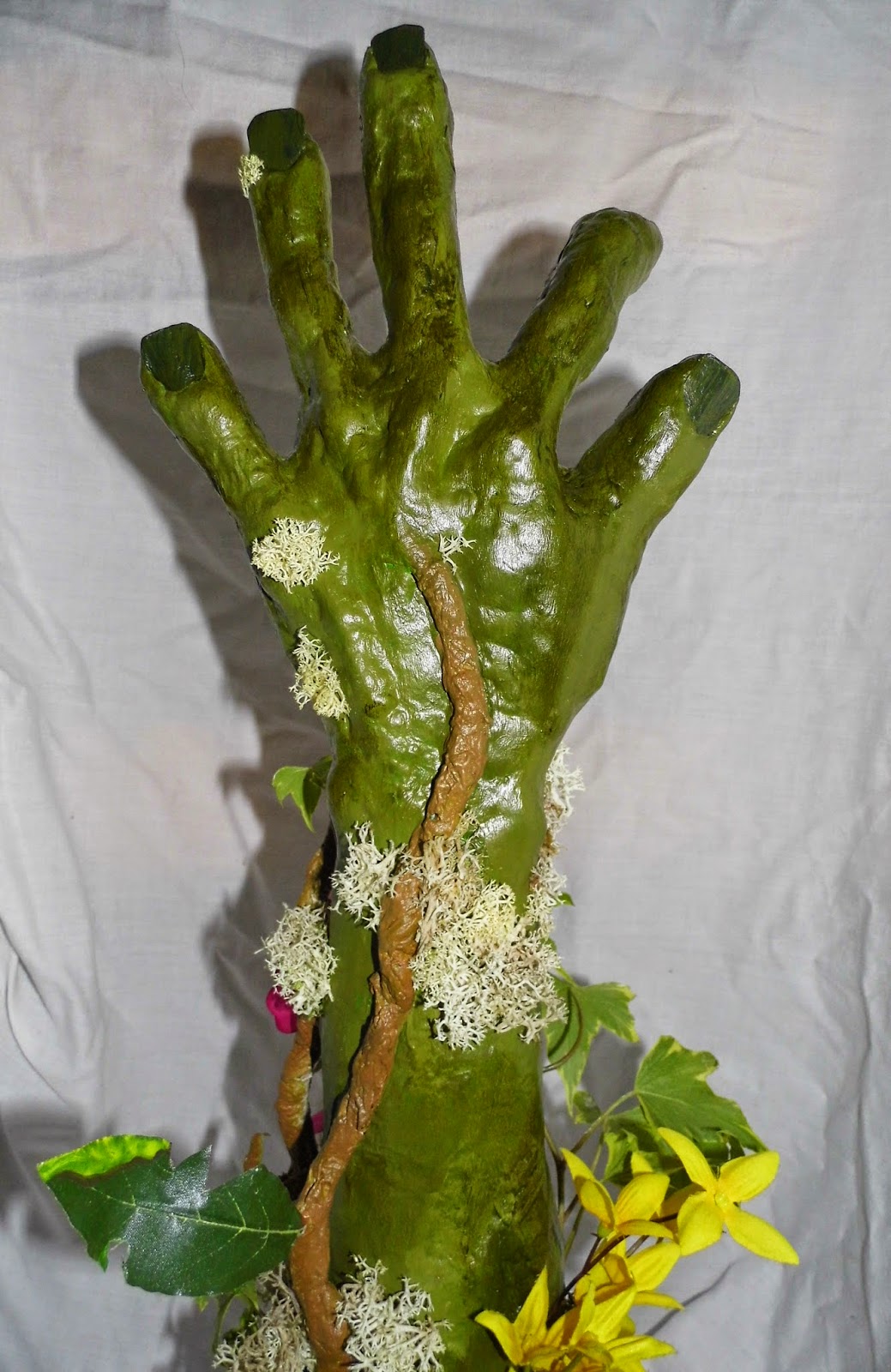 Saturday 4th I was invited by the Sculpture Circle to join their one-day exhibition at the Parc Meurig woods in Bethesda part of ‘Gwyl Ogwen’ an event promoting the natural environment and creative arts in the Bethesda area through working with the community and in partnership for local social and economic benefit. I couldn’t think of a better location to unveil the latest edition to be added to my collection of ‘Wonderment's and Atrocities’ the Arm of the Swamp-Thing! I love the 1982 Swamp Thing movie it appeals to me on many levels as its both a superhero AND monster movie. A wronged scientist turning into a mutant plant creature starring Louis Jourdan and Adrienne Barbeau written and directed/written by Wes Craven what’s there not to like? The scene that many remember is when Swamp Thing’s left arm is hacked by a machete, later on the down hearted Swamp Thing manages to use sunlight to grow a new arm and save the day. This piece, explains what became of the lost arm, it flourished! Made from Papier-mâché and clay on a frame made from twigs and string painted with acrylics. 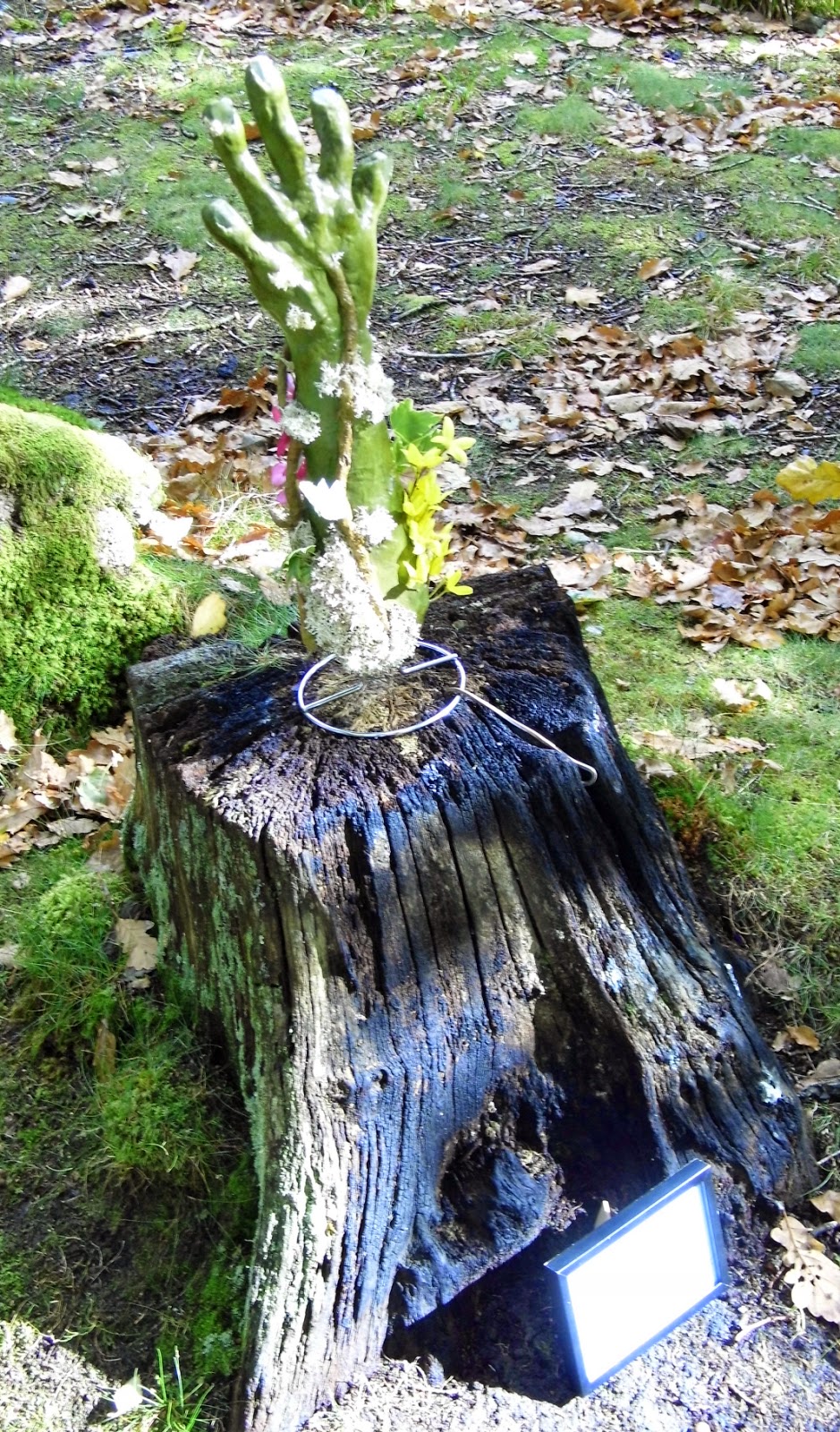 Although I liked the colour of the first Swamp Thing in the movie I preferred Jim Wynorski ‘organic’ look in the equally enjoyable The Return of Swamp Thing and so tried to replicate it by applying roots, lichen, moss and flowers and real ivy (growing 2” during construction of the arm). A label was enclosed that read,
‘Arm of the Swamp-Thing’ Louisiana swamps, 1982
This arm is reported to have belonged to the legendary ‘Swamp Thing’ of the Louisiana swamps believed to have once been one, Dr. Alec Holland a developer of plant/animal hybrids at a top-secret bioengineering facility. It was reported that Dr. Holland actually ‘mutated’ into the legendary ‘Swamp Thing’ by his own formula during a scuffle at the facility when a terrorist group infiltrated it. A later encounter with the group resulted in the ‘Swamp Thing’ loosing his arm. Despite being severed the arm of the of the mysterious half man/ half plant creature continues to ‘live’ to this very day.

Thankfully the heavy rain we experienced the night before held off, and the arm was placed on a tree stump along the path. The woods lent themselves perfectly to the look and it was great seeing the public, made up of art lovers and families out for the day getting up close to the piece and examining the details before making their way along the walkway to seek out other works scattered along the pathway. During the day I was also able to catch up with my fellow collaborators from last year’s 'Hidden Worlds: Hidden Artists’ Exhibition Lisa Hudson, Harri Carmichael, and Lindsey Colbourne and meet many other creative folk and local talent. It was a nice tranquil setting and everyone seemed happy and impressed, as was I and I look forward to the next one and thank them for inviting me along. 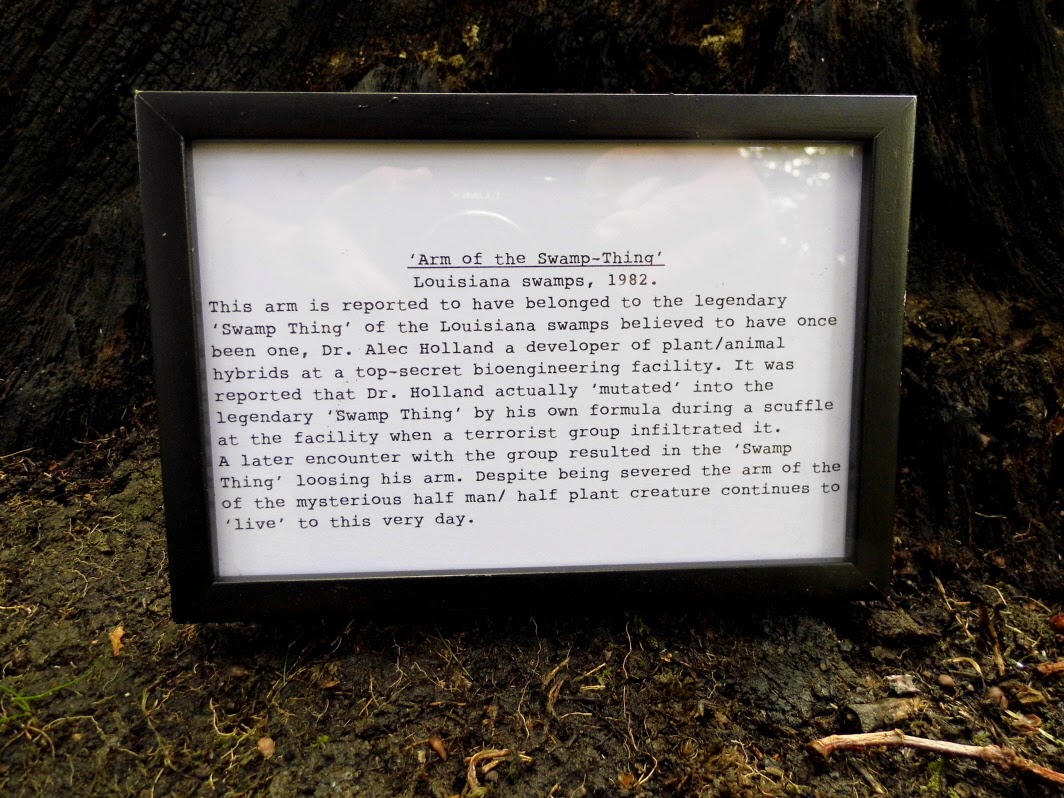 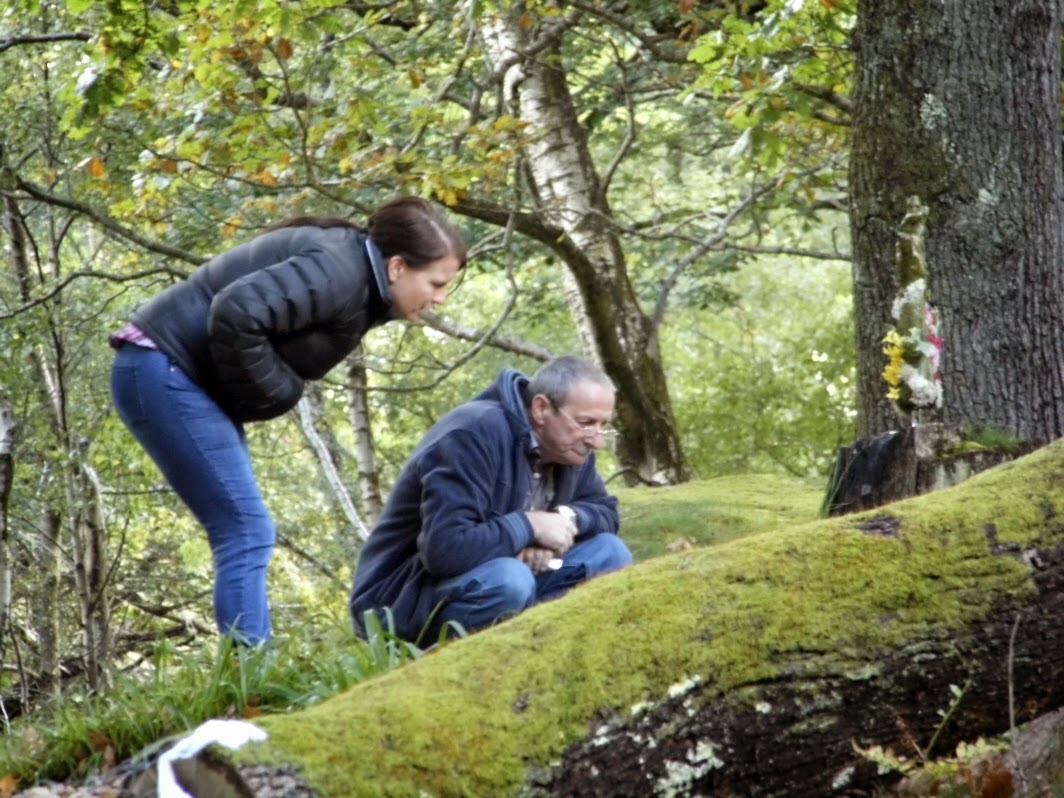 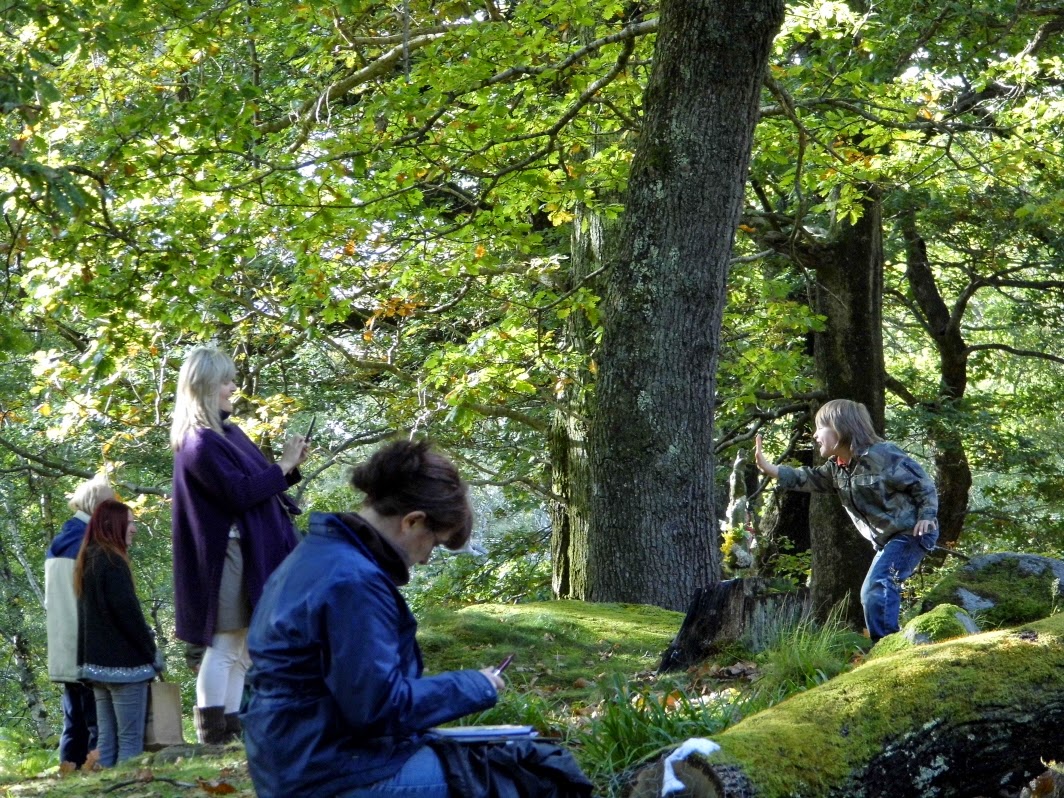 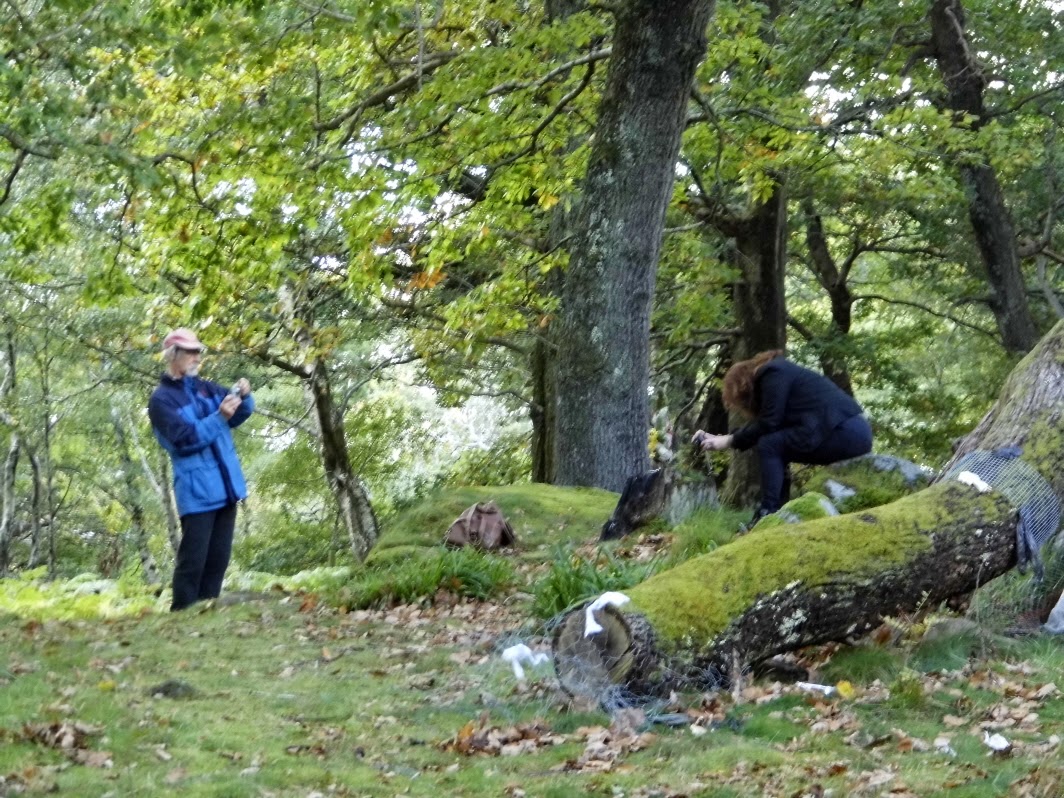 © Arfon Jones 2014. All images are copyrighted throughout the world.
Posted by Arfon Jones at 7:30 pm