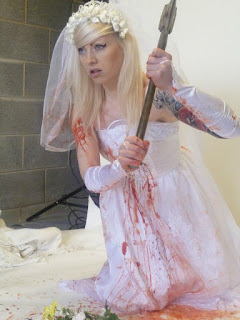 I managed to get out of the studio for a few hours last weekend only to end up in another. I was invited along by Hellbound Media to attend a photo shoot for the forthcoming ‘Slaughter House Farm’ comic which I illustrated.
There isn’t long to go now before the comic is officially released but never the less I wouldn’t want to give too much away so I shall only post this small ‘sneaky peek’ taken at the shoot featuring model/ actress Sian Davies. Keep up to date on the comic’s progress by joining the Hellbound Media facebook page.

On the subject of Hellbound Media, and previews, Shock Value Blue is out now! This 52-page publication promises to be more shocking than ever! Features even more tales of the surreal and horrific from writers and artists gathered together from around the world, AJ Ballard, Anna Susanne, Atlantisvampir, Mark Adams, Matt Warner, Tatiana Goldberg oh and me! Follow the link to order your copy!

© Arfon Jones 2013. All images are copyrighted throughout the world.
Posted by Arfon Jones at 11:05 pm