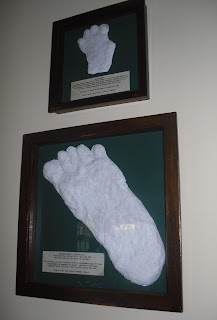 I’ve always had an interest in Cryptozoology and the Unexplained and have wanted to dedicate a corner of my home to the subject for a few years now. Back in December I was presented with the perfect excuse to do just that by my good friend Paul Glover who very kindly gave me some impressive replica footprint casts for Christmas!
I was so impressed and delighted with his work that I immediately set out to create display cases for them.
The specimens to be displayed in the cases were that of the Sasquatch ‘Bigfoot’ and the Orang Pendek. I wanted the cases to have a North American roadside attraction feel about them, Perhaps once constructed by a ‘believer’ who wanted to educate others about these bipedal humanoids by devoting a corner of the store to them.  Conjuring up memories of Dr. Wallace Wrightwood’s North American Museum of Anthropology from the ‘Harry and the Hendersons’ movie but of a standard that might be found at the Willow Creek China Flat Museum, Mike Rugg’s Bigfoot Discovery Centre or Loren Coleman’s International Cryptozoology Museum.
I aged the wood, making the displays seem as though they have been handled numerous times over the years and inside the cases accompanying the casts are information notes typed on paper, which have yellowed in the sun that read, 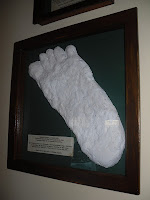 This footprint, originally discovered by Pat Graves prompted Roger Patterson to investigate further into the Sasquatch creature leading to the famous Patterson-Gimlin film shot at Bluff Creek on October 20th 1967. 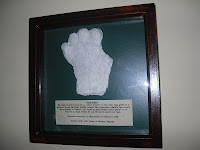 Orang Pendek
The Orang Pendek (translates as 'short person') is the local name given to a mythical ground-dwelling, bipedal primate that reportedly inhabits the forests and highlands of Sumatra. Also known as Hantu Pendek (short ghost) it is believed to stand between 80 and 150 cm (30 and 60 in) tall. Footprint discovered by Adam Davies in Sumatra in 2001


For more examples of Paul’s work please follow this link.
© Arfon Jones 2013. All images are copyrighted throughout the world.
Posted by Arfon Jones at 10:05 am