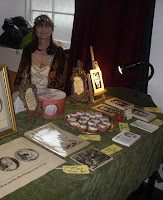 A week has passed since our trip to Chepstow and I still haven’t documented my account of it! Let’s set that right shall we?  We have a lot to get through… Right, Having attended last year’s annual Waltz on the Wye weekender, (as I am sure you know by now this is Wales’s No 1 Steampunk/ Neo Victorian festival event). It promised to deliver even more entertainment for its second run and they certainly made good on their promise. However, this year it was (mostly) business not pleasure for Beth and myself as we had a stall at the Mechanised Market!
Friday: We made good time arriving in time for the Friday night entertainment Morgan & West, the time travelling Victorian magic act. Like many others I first discovered this duo on ITV’s 'Penn and Teller's 'Fool Us'. (The only Saturday night variety show I might add that I actually enjoy… although I am biased as I like magic and Penn & Teller). What was marvellous about their act was that aside from the fact that they did actually ‘Fool’ Penn & Teller the act was reminiscent of a Victorian conjuring act and I like that as well. A wonderful blend of magic and humour they wowed the audience, they also (albeit unknowingly) made reference to one of the pieces I intended to display the very next day (second blog entry). After the show we managed catch up with some familiar faces, One quick drink later and it was back to the B&B we had an early start in the morning!

Saturday: All the stallholders where let in to the Drill Hall to set up their tables, ready for the Mechanised Market so what did we bring? On the official site I promised “Wonderments and Atrocities” Id like to think I kept true to my word as our table consisted of; 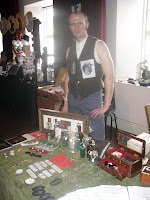 Not only that but the table was right next to the table of my arch-enemy  James Richardson- Brown who along with his own creations and patches made by the delightful Manda Rin he also had copies of our newly published joint venture ‘Brajj’s Guides Present The Life of the Air Kraken’.  The book made its debut at the Waltz on the Wye, allowing anyone that hadn’t already pre-ordered his or her copy the chance to check it out before buying.
Once the table had been laid out, I adjusted my cravat (I wore my trademark black suit, waistcoat and lab coat) as the doors opened to let the eager and friendly public in to have a look around the various splendid stalls on offer.  Beth (dressed as a Pre-Raphaelite model) and I gave countless Glow in the Dark Marie Curie Portrait demonstrations. We kept a lamp light on the demonstration portrait, removed it from the easel and placed it in the demonstration radioactive hatbox complete with slit so the viewer could see the full effect of the glow in the dark paint. Everyone was amazed at the effect and I even had it on good authority from several children that it was “cool”. I was doubly pleased when photographic supremo and onsite photographer PP Gettins successfully photographed the glow in the dark effect! (Although I never doubted him!) So between the demonstrations of glow in the dark portraits and the signing copies of ‘The Life of the Air Kraken’ there was barely any time for lunch! But we somehow managed it and remembering how delicious the tea was last year (provided by wonderful Strumpets with Crumpets) we realised that it lacked only one thing, so we brought our own china down with us to experience the full potential of a refreshing cuppa... 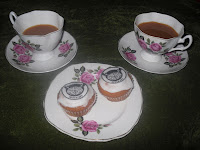 One of the great things about having a stall is that its practically everyone convened at the market place allowing me ample opportunity to chat with all manner of well-dressed ladies and gents (to name them all would require a separate blog entry!). Sadly my plan to photograph everyone that came up to say hello fell flat with my only taking a handful of photographs, but trust me they all looked amazing! 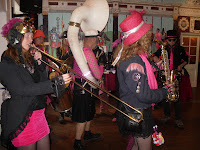 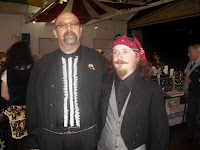 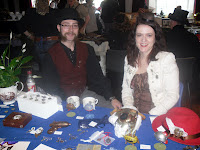 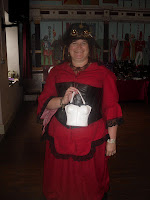 I often experience ‘waistcoat envy’ at these events and this weekend was no exception it happened on two occasions first to Martin Kingston wearing a delightful kingfisher waistcoat and the second time was with Jarkman who sported an amazing custom made Ernst Haeckel waistcoat (featuring octopi and jellyfish).  I can’t recall ever experiencing ‘watch envy’ before but I did this time round when Jarkman showed me his beautiful Zlatoust Diver's Watch that actually made me question my objection to wearing wristwatches! I was able to chat with my fellow stallholders as well, the likes of Prof. T Bottom the man behind Trolls Bottom alcoholic elixirs and unctions (Keen to restock on mead Beth very kindly treated me to a bottle!). Kelly Knight and Lucy Rees of Dr and Knight's Curiosity Emporium also had a table that featured many wonderful creations (The EggShips being my particular favourite). I said that this event also allowed me the opportunity to make new acquaintances this was also the case with stallholders as I met the Almighty Bobbu!
As late afternoon drew closer it became more than apparent that everyone was having a superb time, being so close to the door I was always aware of what was going on outside the hall. On two occasions curiosity had the better of me and I simply had to go out and investigate further this was due to…
Three clockwork ladies riding a pedal-powered gramophone tandem tricycle and Meg Kingston’s mobility scooter customised into a time machine that filled me with full on nerdy excitement (one of my all time favourite movies!) which was rightly awarded the Spirit of Steampunk award! 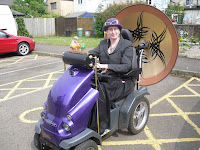 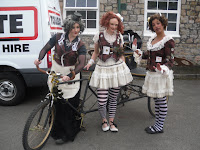 (Left to right) Three clockwork ladies with a pedal-powered gramophone tandem tricycle and Mrs. Meg Kingston’s time machine mobility scooter (with a rather fetching waistcoat reflected on the front of the device) 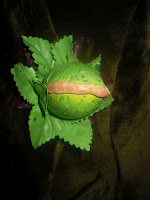 The positive vibe continued into the second half of the day, the evening’s Cabaret and Ball. Beth and I returned dressed in our eveningwear (I sported a newly discovered species of plant in my buttonhole called an Audrey 2…)
We settled down with a glass of Pimms as the beautiful Lily Belle compèred for the evening, linking a vast array of acts that lead through to Chap-hop MC - Professor Elemental. Having now heard Mr. B the gentleman rhymer on two separate occasions it was rather nice to hear the other half of this gentleman rivalry! We then decided to call it a night as we had another day on the stall. At the risk of sounding repetitive I shall fob you off by merely saying that Sunday was similar to Saturday only with everyone even more happy/ talking about the evenings entertainment. Rounded off with a huge raffle, and Mr James Richardson-Brown and myself awarding a prize to the winner of our Air Kraken competition (congratulations again Heike Harding-Reyland!) finished off with huge rounds of cheers and applause for Rachel and Andy for organising such a marvellous event.
The event was generously garnished with friendly smiling people having a good time, as a stallholder and a spectator at the evenings events I thought it was truly Fantastic. As side note I would like to thank everyone that came to the event and came up to the stall to say “hello” and listen to my ramblings about glow in the dark portraits, greeting cards and atomic tie pins! (Double thank you(s) if you bought something!) Your support it greatly appreciated I sincerely hope to see you all very soon.
Now, for part 2 of 2!

Additional photographs provided by Mr PP Gettins and Mr David S Tails
© Arfon Jones 2012. All images are copyrighted throughout the world.
Posted by Arfon Jones at 9:54 am