Wonderments and Atrocities: The Finger of Paul Daniels 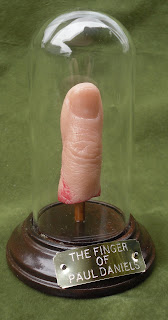 The latest addition to my collection of wonderments and atrocities is The Finger of Paul Daniels.
This idea was the result of reading a shocking news report back in January that claimed “Magician Paul Daniels cuts off finger with circular saw”. Like many reading this heading I was very concerned but thankfully it wasn’t quite as bad as they had made out! Much like the time he had supposedly been blinded by Sooty it was just another example of the press exaggerating the facts…Thankfully the man himself was able to give an accurate account of what happened on his blog… “True, the saw did rip through the top knuckle area of my left forefinger but it never came right off and it is already healing up. The little finger of the left hand has a tiny bit missing from the tip but it never touched the nail. The middle finger is untouched. The worst bit is that I have lost the top section, the part that had the nail on it, of my ring finger.” Relieved and reassured my mind started racing! what magical powers would the forefinger of the great Paul Daniels weald?! I was reminded of Galileo's finger displayed in Florence and started to put some ideas to paper, playing on the notion of what if the finger had been cut, retrieved and put on display? So here it is the Finger of Paul Daniels for all to marvel at!

©Arfon Jones 2012. All images are copyrighted throughout the world
Posted by Arfon Jones at 12:00 am