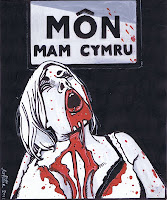 In light of the Zombies from Ireland poster being so well received I thought I would share one of the concept drawings used which features lead actress Sian Davies who plays a zombie stripper in the film!
Horror and attractive women are always a winning combination so it was a pleasure to work on this project with Sian who not only works as a professional model she also works as a wrestling ring girl for Britannia Wrestling Promotions.Follow the link and show your support!


In other Zombies from Ireland news, the trailer has gone viral! Interest continues to grow with an article in the North Wales Chronicle along with a competition to win the movie poster signed by the director Ryan Kift, star Sian Davies and me (the artist/ designer). The competition has received an amazing response I met up with Ryan and Sian on the closing date of the competition to sign the poster ready to be posted out to the lucky winner which will soon be announced. 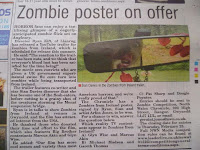 For further details regarding Zombies from Ireland join the facebook group

UPDATE: the drawing has been added to Live Nude Ghouls a site devoted to “the ghoulishness of others”

© Arfon Jones 2012. All images are copyrighted throughout the world.
Posted by Arfon Jones at 6:14 pm