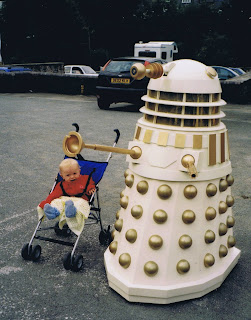 When I started this blog back in September of 2009 I never imagined I would write 300 posts but here we are! Well then, I used the 100th post as a way to go back in time and document an event that had happened before I had a blog recounting my trip to New York in November 2009 to visit Ghostbusters filming locations and then for the 200th I went back to October 2005 and shared my experiences of attending the Doctor Who Galactic Dinner event in Cardiff where I meet David Tennant and Billie Piper. Well this time we are sticking with the Doctor Who theme but going back just a little further, August 16th 2003. Location: The BBC Doctor Who Experience, Llangollen, North-East Wales the day I met the 6th Doctor, Colin Baker! Welsh model railway manufacturer Dapol (play on its founder’s David and Pauline Boyle's names) was first established in 1983 and they soon became a leading force in the production of model railway products and in 1988 they were granted a license by the BBC to produce a range of Doctor Who figures at their premises in Llangollen and this would later lead to the opening the 'BBC Doctor Who Experience' exhibition on their premises on the 17th of June 1995 an amazing collection of original props and costumes from the show’s twenty six year run (the largest permanent sci-fi exhibition of its kind at that time). 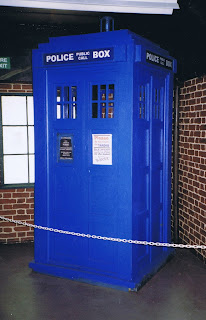 It was open throughout the year and received an excess of 50,000 visitors a year but sadly by 2003 visitor numbers had dropped to around 15,000 and when the BBC decided to not renew their license with Dapol the decision was made to permanently close the exhibition. So on Saturday August 16th 2003 Colin Baker was invited to the site for what was to be the exhibition’s last big event to meet fans on what was Doctor Who’s 40th anniversary year.
I had been to the exhibition in the past but never met any of the Doctors and as I’ve mentioned countless times before the Colin Baker/ Sylvester McCoy years was when I first became a fan of the show seeing Colin fighting Cybermen made a life long fan of me so he is effectively my first Doctor and I was eager to meet him. Now equipped with my own transport I was able to embark on a 70mile drive to Llangollen my 1 year old daughter Catrin in tow to meet the 6th Doctor! Having followed the convenient Dalek signs posted around the village, crossing over the River Dee and taking a right at the foot of the bridge I parked outside the attraction just as some members of the Hyde Fundraisers, a group of Who enthusiasts that create replica props and costumes to help raise funds for all manner of good causes, began assembling their Daleks and this allowed me the opportunity to snap a photo of my daughter with her first Dalek! 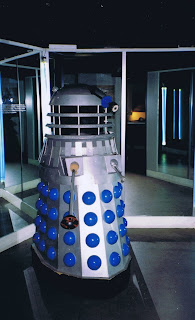 We were at the very front of the queue and as we made our way past the Cyberman costume we stepped through the large Tardis door, only to see another Tardis in the corner and beside it was a novel part of the attraction a replica 1960’s living room with a family sitting on a sofa (Yes, you guessed it! With a child hiding behind the sofa!) with the first ever episode ‘An Unearthly Child' playing on the television. Inevitably a Dalek could then be seen behind the next corner and I remember how the strobe lighting, mirrored walls made it quite exciting. 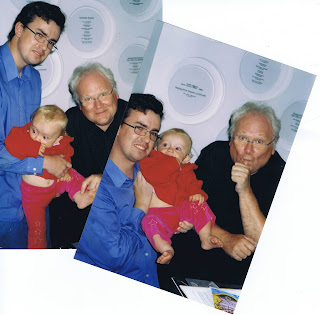 Clips from various episodes would play on various monitors spotlighting each incarnation of the Doctor before eruptions of the theme, Daleks shouting “exterminate” or the Tardis dematerialisation sound effect would echo through the air and then we would see the familiar Tardis console room roundels on the walls and a replica console and there next to it sitting behind a table was Colin Baker the Sixth incarnation of the Doctor! He was very warm and friendly and seemed genuinely pleased to meet fans and I was able to tell him how he was my first Doctor before introducing him to Catrin who he really got on with, so much so that we had our photo taken together. Being so busy at this point we thanked him again and moved on to allow the incredible line up their chance to meet him and so we carried on with the rest of the tour costumes worn by the Doctor! 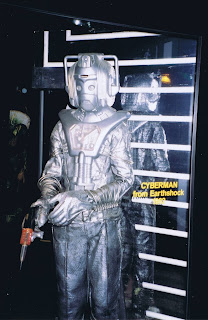 In the first window was an original cane used by William Hartnell the first Doctor, a pair of trousers worn by second Doctor Patrick Troughton on the ‘Two Doctors’ and coat worn by Jon Pertwee the third Doctor! The next window coat, waistcoat and famous scarf worn by Tom Baker the forth Doctor! The next window along had both Peter Davison and Colin Baker’s costumes as fifth and sixth Doctor along with a waistcoat worn by Colin in the 'Two Doctors' and at the very end of course was Sylvester McCoy’s getup as the seventh! These were still the early days of digital photography and I was still using film at this time so I would often find camera glare or hand prints on display glass would scupper my photographic skills! After seeing some of the clothes that once belonged to some of the companions were also on display, we got to my favourites the Cybermen! I was always impressed with this case as it displayed the development of the Doctor's second most popular villain via a collection of heads something that has remained with me ever since (something for a future post). Then it was onward to see the rest of his villains in the hall of monsters! Yeti, Ice Warriors, Silurians and Sea Devils were there (Not Morbius though, I don’t know where he was... I had to go to Blackpool to see him!) and sadly at this point some of the lights and animatronics didn't work but they were still impressive! 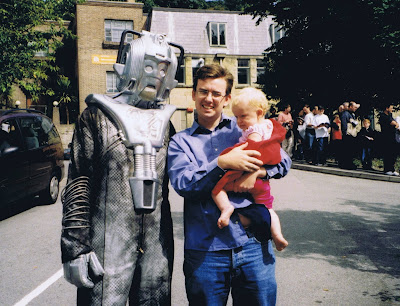 Vervoids, Fenric and Cheetah People and the giant brain from 'Time and the Rani' later we were outside standing next to Bessie, the third Doctor's faithful car, before going around the front to have numerous photographs taken with some more Hyde Fundraisers dressed as Sontarans and Cybermen and then that was it that was the last time I visited the BBC Doctor Who Experience the centre was permanently closed on the 30th December 2003 before being cleared out the following month relocating seven miles away over the English border, near Oswestry, the props and costumes were moved on to Blackpool before eventually being sold at auction to private owners. I would see Colin Baker countless times after that but this one will always be precious to me. So did you visit? Share your memories! And thanks to you all for reading the last 300 posts!

© Arfon Jones 2018. All images are copyrighted throughout the world.
Posted by Arfon Jones at 4:15 pm