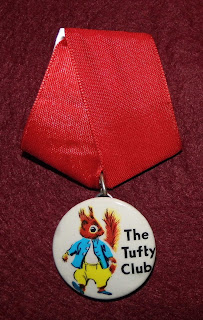 This medal dates from the mid 1960's and features Tufty Fluffytail the road safety RoSPA (Royal Society for the Prevention of Accidents) squirrel created by Mrs Elsie Mills MBE in 1953. Tufty featured in a series of stories aimed at delivering clear and simple messages about safety to the children of Britain and in 1961, the Tufty Club was founded, forming a nationwide network of local groups aimed at encouraging children to take care when crossing the road and at its peak there were 24,500 registered clubs across the country. By its second year around 60,000 children had joined the club and by the 1970s it was estimated the Tufty Club had reached 2 million members. It was also around this time that the RoSPA released a series of animated PSA's narrated by Bernard Cribbins that not only raised further awareness but also assured Tufty a place in the Britain's conciseness.


Other medals to check out:
Blue Peter Medals
The I-SPY medal

© Arfon Jones 2017. All images are copyrighted throughout the world.
Posted by Arfon Jones at 6:45 pm