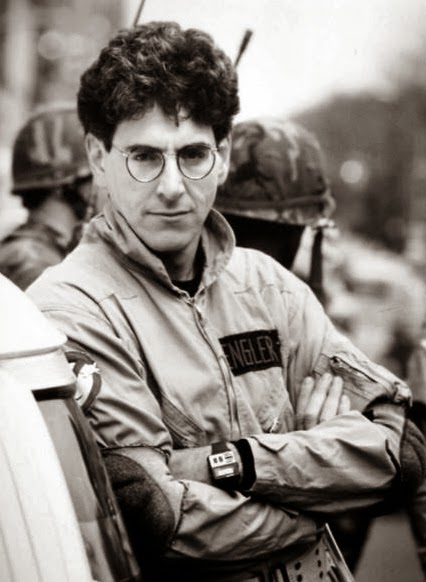 Nineteen years into my life something special happened to me, a mundane moment for others perhaps but for me it made me smile. For a fair chunk of those nineteen years I had many a hurtful name thrown at me, and having a unique name excluded me from having a nickname. But at this particular moment in my lifetime someone actually called me “Egon” and I accepted this comparison as a compliment. They were unaware that Egon Spengler had long been a childhood hero of mine. If Ray Stantz was the heart of the Ghostbusters Egon was the brain and when Ghostbusters was released I wanted to be Egon, he was always my favourite and when we ran around the schoolyard-busting ghosts I did so as Spengler, providing escapism from those hurtful words previously mentioned. So I was saddened to hear that Harold Ramis, the man who was Egon Spengler had passed away aged only 69 of “autoimmune inflammatory vasculitis” a condition itself which sounded like something Egon would have come up with.
Ghostbusters throughout the world will mourn his passing, this one included.


© Arfon Jones 2014. All images are copyrighted throughout the world.
Posted by Arfon Jones at 2:22 pm