Zombies from Ireland Screening exhibition at the Galeri 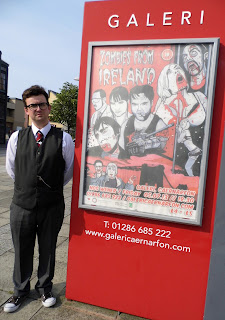 As I mentioned in the previous post, Ryan Kift’s Zombies from Ireland was screened at the Galeri in Caernarfon on Friday night, There was a great turn out for it and it seemed to go down very well with the audience. I was also there showing my support and the original artwork used for the film’s production, and a few ‘extras’, which were on display in the lobby of the Galeri along with props and outfits from the film. 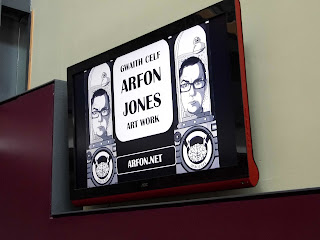 It’s always great to see your artwork being used, so it was a great thrill for me to see the poster itself 3 times the size I originally painted it, on display outside doing exactly what it was intended for creating interest and drawing the audience in. It was equally nice to see examples of my work being looped on the Galeri’s monitors thought the whole day too! Everyone was very nice and it was a delight being there, my sincerest thanks to everyone for coming out to see the film and taking the time to come over and say “hello”. My sincerest thanks to the Galeri for all their support and a big thank you to Jared Pegler Designs for his work on the poster.
Further screenings are in the pipeline so do please look out for them and come along and see the film for yourselves and support Ryan and Sian’s creative endeavours.


© Arfon Jones 2013. All images are copyrighted throughout the world.
Posted by Arfon Jones at 12:34 am