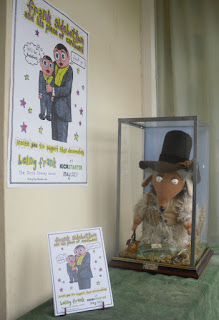 Here is a picture taken from the entrance to my studio… I try to devote this blog solely to my work, but in this instance its not a project that I am directly involved with. But it does regard someone that has not only featured regularly in my work over the years but has also been an influence on it, Frank Sidebottom/ Chris Sievey (I am also a ‘backer’ of the project so I suppose I am involved in a small way.) I have often said that Chris Sievey is one of Britain’s most overlooked artists so I welcome any attempts to educate others about his life, work and legacy, case in point, ‘Being Frank: The Chris Sievey story’. This official feature length documentary by Steve Sullivan is devoted to the life of Chris Sievey and his infamous creation Frank Sidebottom. “Frank's real identity was a closely guarded secret and only a handful of people knew who was actually beneath the head. Now, following his untimely death in 2010, Chris Sievey’s family, close friends and colleagues are prepared to discuss this innovative, wayward genius for the first time and explain why he chose to spend 28 years hiding his identity and letting a fictional alter ego steal his limelight.”
A Kickstarter fundraiser has been launched to raise funds for the documentary. I am happy to report that the minimum target of £20,000 has been achieved assuring that all the interviews for the film can now be shot. However, it doesn’t end there the Kickstarter page is still in effect and they have added a stretch goal. If they can raise the total to £40,000 they will be able to acquire the rights to Frank’s classic TV which will make the documentary extra special! So please follow this link, find out more about this great venture pledge, and tell others about it by sharing the Being Frank Facebook page or following the film on Twitter
@BeingFrankDoc
Thank you.