How to Survive A Zombie Apocalypse In Wales

I had been waiting months for this evening! The How to Survive A Zombie Apocalypse cast was coming to Harlech to present a seminar in zombie survival! I discovered this cult show online last year and followed their work with great interest since, listening to their weekly podcast series and reading the latest news and reviews on their facebook page. But tonight I was finally going to experience the fringe sell out show for myself! 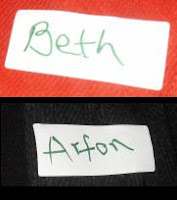 So it was off to Harlech once again. As we made our way towards the theatre I wondered if the building would meet the requirements needed in a zombie invasion. After collecting our tickets, we sat in the lobby to wait for ‘curtain up’ only to be greeted by Donald (David Ash) the HTSAZA survival expert who informed us that being a seminar we needed name stickers. Having attended various forms of seminars over the years it was refreshing to attend one tackling a subject that was of interest to me we stuck the name badges on and made our way to our seats. Dr Dale Seslick (Ben Muir), a leading expert in zombology and HTSAZA founder walked up to the podium and gave a brief introduction to what the seminars were about, Namely survival! The audience didn’t quite know what to expect! He introduced us to the rest of the HTSAZA team science expert Dr Judy O'Dea (Jess Napthine) Dr Dale’s nephew Tristen Granger (Lee Cooper). Having recently been invited to capture the good Dr's likeness for the official web site it was strange to see him ‘in the flesh’ taking questions from the audience.
Having delivered several survival pointers and tips, ranging from the importance of dancing skills during a zombie apocalypse to avoiding vegetarians, it was time for a short break. We remained in our seats and reflected on what we had learnt and as we finished off a bag of M&M’s it was great listening to other audience members discussing zombie movies and questioning if zombies could run.
The second half was excellent, the audience had warmed to the team and were happy to play along with the survival scenario. If a wrong answer was given it cost you your life and so you had to remove your name badge, the audience number was whittled down to 2 survivors, which was a rather good score by all accounts. After the show the crew met the audience in the lobby to sign autographs and pose for photographs I was also able to pick up a signed copy of ‘Dr Dale's Zombie Dictionary: The A-Z Guide to Staying Alive’. We had a fantastic night, it was well worth the wait! It was improvisational comedy at its finest, with its well-acted endearing characters and hilarious slant on a situation familiar to many tackling a topic we have all thought about at some point! Well, I know I have… 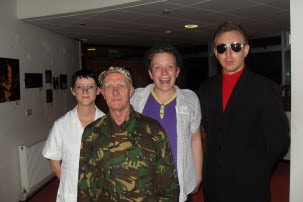 This was the last stop of their 2010 tour but check out the offical site for 2011 tour dates!
© Arfon Jones 2010. All images are copyrighted throughout the world.
Posted by Arfon Jones at 12:23 am