Last night, Beth and I convened on Castlefield Arena in Manchester joining 5,000 other fans to celebrate the life and career of Chris Sievey a.k.a Frank Sidebottom. Many members of the audience wore papier mache heads and Altrincham football shirts I wore the badge he sent me 2 weeks before he died. This open-air extravaganza was tarnished only by the sad fact that he was no longer with us, Despite this we all remained upbeat during the festivities. 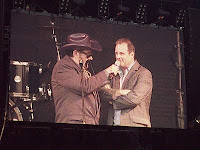 The evening started with Frank’s brilliant Channel M test card via the big screen as the Frank Sidebottom’s Oh Blimey Biggest Band took to the stage performing some of Frank’s classic songs with vocals provided by Frank’s long lost big brother Hank Sidebottom!After a few hilarious clips from his ‘Frank Sidebottom’s Proper Telly Show in B/W’ an interview with Radio 2 DJ Mark Radcliffe of Mark and Lard fame. He reminisced about life on the road with Chris and Frank when he was he was a drummer for the Oh Blimey Band.
Damon Gough aka Badly Drawn Boy followed, sharing his story of his first encounter with Frank then played four of his songs closing with a touching 'Timperley Sunset’ reference. 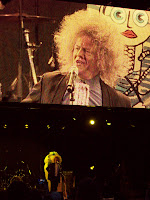 The evening progressed with further tributes from family and friends including fellow cult legend, the great Charlie Chuck!Along with Mr B the Gentleman Rapper and Moonchester the official mascot of Manchester City F.C spaced between clips from Frank’s past television ventures including ‘Frank’s Fantastic Shed Show’. ’Frank’s World’, the animated short created by the man himself and the hilariously funny, never aired ‘Frank Sidebottom’s Celebrity Sleep Over’ were Frank dropped in on former Smiths' drummer, Mike Joyce.

The show ended with a performance by the Refreshies an updated version of The Freshies with Harry Sievey Chris’ youngest son stepping in before eldest son Stirling Sievey (Roger the boy next door) closed what was an emotional evening’s worth of entertainment asking the crowd to ‘Guess who's been On Match of the Day?! A send off that lived up to all that was Frank Sidebottom.

With ‘Guess who's been On Match of the Day? now on iTunes as a posthumous bid to get Frank to No 1 in the charts Along with plans to erect a statue of Frank in Timperley the Frank Sidebottom legacy is far from over!
Posted by Arfon Jones at 5:50 pm