Well, 2011 is drawing to a close it’s been a busy year but it’s also been a good year… Creatively speaking it’s been marvellous! I have been fortunate to have my work featured and displayed and published as I worked on many projects covering a very broad range of themes. Despite the workload I have (somehow) managed to keep this blog updated…. However, I did manage to miss one or two items so I thought I would use this last entry to recap those missed moments

February sadness and joy… Joy at winning Stuart Ashen’s art competition on line with ‘Ashen’s Poundland Peril’. But sadness with the passing of Nicholas Courtney (1929-2011) Nick famously played Brigadier Alistair Gordon Lethbridge-Stewart in Doctor Who and was a regular face at Doctor Who conventions, I met Nick countless times over the years and thought he was a lovely man. I shall always treasure an evening in Stockton on Tees discussing giant maggots over Cheese and biscuits.

March Invited to Farthings in Selsey to attend a party that both celebrated the Sky at Night’s 700th episode and Sir Patrick Moore’s 88th birthday! It was lovely to be able to return to Selsey and see Sir Patrick again. The star-studded party was held in a marquee that heaved with people discussing astronomy and science over drinks a good time was had by all!

April a month that not only saw ‘The Cooling Pond’ go on display in Los Angeles it was also the month of Dimension Jump XV The official Red Dwarf convention was held at the Holiday Inn, Birmingham and the 2011 logo was designed and illustrated by yours truly! Inspired by the episode ‘Demons and Angels' the fifth story of series V where the crew try to ‘Triplicate’ food, the logo features a strawberry. The logo was used on various items at the convention including the event banner that was later signed by all the guests and auctioned by the show’s co-creator, writer, director and producer Doug Naylor. 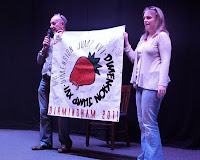 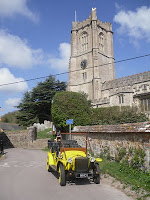 The weekend after, Beth and I visited the village of Aldbourne in Wiltshire the setting for the classic 1971 Doctor Who story ‘The Dæmons’ staring Jon Pertwee as the third Doctor. Aldbourne (or Devil's End as it was called in the story) is a popular pilgrimage site for Doctor Who fans so when Beth and I discovered that there was to be an event celebrating the story’s 40th anniversary at the village in April we plot a course for the picturesque village (stopping only to visit Stonehenge!) We had a delicious meal at the Blue Boar pub (or the Cloven Hoof as it was called in the story) then attended several Q& A’s by the surviving cast members including Richard Franklin, John Levene and Katy Manning. Highlights of the day had to sitting next to Damaris Hayman (Miss Hawthorne) watching the Headington Quarry Morris Dancers dancing on the green and going for a drive around the village and back roads in a replica of the Doctor’s car, Bessie! We had an absolutely delightful weekend we left Aldbourne very happy Doctor Who fans. 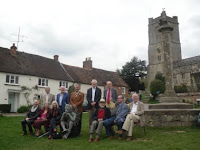 Original cast and crew on The Green 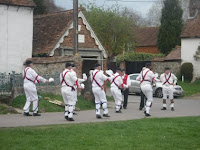 Three days after our Who related weekend, the world of Doctor Who, received another tragic blow… Elisabeth Sladen known to millions as Sarah Jane Smith died on the 19th
I met Lis Sladen in Blackpool in 2006 and found her to be exactly what everyone said she was a lovely, warm obliging person by far the best Doctor Who companion and a tragic loss to the show. 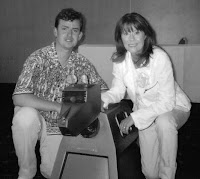 October seemed to be a month of theatres not only did we attend the ‘Save The Coliseum Halloween party on the 31st. But on the 12th I was able to tick one item off my rather hefty ‘things to do’ list when I had the pleasure of seeing Paul Daniels perform magic live at the Pavilion Theatre in Rhyl! Growing up in the 1980’s I adored Paul Daniels, I look back at his weekly magic show, Wizbit and his teach yourself magic books with great fondness so to be able to see the master perform his magic live was amazing! He didn’t fail to impress both his magic and repor with the audience was as I had imagined, flawless. The “Hair Today, Gone Tomorrow” also featured (the lovely) Debbie McGee and son Martin Daniels who was assisted by the wonderful Andi Mac! A traditionalist at heart I favour what you might call ‘traditional’ magic and this show had it all (and rabbits too!). I was doubly pleased at being able to meet both Paul Daniels and Debbie McGee in the foyer after the show they both signed autographs and took the time to meet the public, performing tricks and sharing stories and jokes it was fantastic. I urge you all to check out his site and see what he is up to in the New Year! 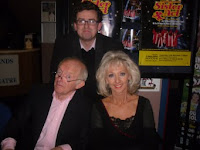 Then on the 15th of October attended a screening of Monty Python and the Holy Grail at the Theatr Colwyn in Colwyn Bay. The event, marking the reopening of theatre’s £750,000 facelift was presented by the theatre’s patron Terry Jones, who was later interviewed by Phill Jupitus who also took questions from the audience. Naturally I had seen the film many times before but never on the big screen so it was wonderful to be able to sit amongst an audience and laugh along with others, we had a wonderful afternoon.


November Friday the 18th to many this was Children In Need Day but it was also Beth’s birthday and a return trip to Selsey was on the cards (see March). For Beth it was a routine trip to visit Patrick for super, but for me this was a trip that had been several weeks in the making as I intended to ask her to marry me! Before we embarked on our trip a surprise Birthday dedication courtesy of BBC Radio 2’s Ken Bruce who kindly granted me the opportunity to declare my love and well wishes via his show!

A few hours later we safely arrived at Sir Patrick’s home for a lovely home cooked meal and a glass of champagne to toast Beth’s special day and then out to the garden to use Patrick’s famous 15" Reflector to view Jupiter! The garden was busy that evening as the Adur Astronomical Society were holding their monthly meeting with John Fletcher of Mount Tuffley Observatory. As everyone observed deep sky objects I walked Beth over to the 12" Newtonian telescope (used by Patrick for his historical lunar mapping work). Ironically a street light proved to be most useful for this amateur astronomer as it allowed me to be see and be seen as I knelt down on one knee! Beth who had no idea what I was up to looked on in bewilderment as I produced my specially made ring box complete with hand crank when wound played Elvis Presley’s ‘Love Me Tender’… Knowing that Beth would instantly recognise the tune I let the music box ask on my behalf and to my delight (not to mention relief!) she said yes! A kiss and a reassurance that I was serious later, we went back to the house to let Patrick know the outcome of our plan! Another bottle of champagne later we shared our news with all in attendance receiving many kind well wishes from the Adur AS and John Fletcher who logged the event in the telescope logbook! And that was the night this artist proposed to his muse, my sincere thanks to everyone that shared our special evening.

There we have it 2011! A year of ups and downs crammed full of wombles, frozen/ shrunken dinosaurs, zombies, Papier-mâché heads, sea monsters, mutant jelly/pumpkins and fish, chainsaws, glow in the dark paintings, classic sci-fi, iconic superheroes, ducks and not to mention one or two childhood heroes thrown in for good measure! I was determined to make what sounded like a dull year one to remember and I thank all concerned for helping me achieve this Happy New Year!
Right then, 2012…

© Arfon Jones 2011. All images are copyrighted throughout the world.
Posted by Arfon Jones at 4:41 pm