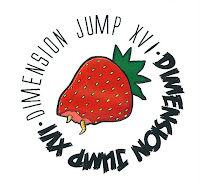 I first discovered Red Dwarf during its forth series in 1991 and from that moment on I was hooked. I read the books, listened to the tapes and I’m not ashamed to tell you dear reader I also organised a Red Dwarf fan club at my school. An idea, inspired in part by my membership to the Official Red Dwarf fan club. Observant fans who spotted the details on the VHS tapes could join and receive a membership badge, card and quarterly newsletters filled with fan fiction, news about the show and details of the Red Dwarf convention, Dimension Jump. An event for like-minded fans to meet and greet and share their enthusiasm for this fabulous programme. So it is with pride I can announce that the 2011 Dimension Jump will feature a logo designed by yours truly!

Inspired by the episode ‘Demon’s and Angels' the fifth story of series V were the crew hope to solve supply problems by ‘Triplicating’ food. The result, one strawberry exhibiting all the best qualities of the original, the other all the worst. I was thrilled to discover that my logo was selected, I thank all involved. I look forward to seeing the logo in use next year!

I was doubly pleased to discover that it wasn’t just my logo that appeared in the newsletter, it also features an illustration created last Halloween inspired by BBC’s Ghostwatch. ‘Ghostwatching’ can be seen accompanying Rich Lawden’s insightful article 'Ghostwatching: My Wonderful Obsession'! In the article Rich shares his passion for Ghostwatch. Thanks Rich for allowing the image to be featured along side your fantastic work!

*UPDATE 5TH NOVEMBER 2010*
The logo was unveiled on the Official Red Dwarf site!