‘How to Survive A Zombie Apocalypse’ 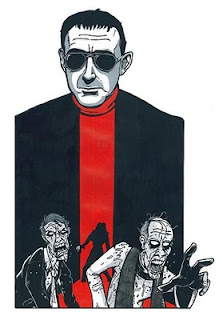 Following on from their sell out show at the August Festival Fringe in Edinburgh ‘How To Survive A Zombie Apocalypse’ is now touring the UK, introduced by leading expert in zombology, Dr Dale Seslick, the seminars teach you all you need to know about zombie survival.I was recently invited to capture the good Dr's likeness for their web site!Click here for more information and tour dates!
© Arfon Jones 2010. All images are copyrighted throughout the world.
Posted by Arfon Jones at 5:55 pm No comments:

Sir Patrick Alfred Caldwell-Moore
Was born in 1923 developed an interest in astronomy at the age of six elected to the British Astronomical association at eleven. Having served as a navigator in the RAF during the Second World War he was elected a fellow of the Royal Astronomical society in 1945. He constructed a homemade relocating telescope in his garden and began observations of the moon. Establishing himself as a specialist in lunar observation. In 1959, the Russians used his charts to correlate the first lunik 3 pictures of the far side of the moon, his lunar maps were used in the NASSA Apollo missions. Despite writing 70 books on astronomy he is known to many as the presenter of the monthly BBC series ‘The Sky At Night’ which he presented all but one since 1957 earning him a place in the ‘Guinness book of Records’ as the longest serving television presenter. The series has been attributed as a major factor in the encouragement of amateurs perusing the subject of astronomy and in 2001, Moore was appointed knight bachelor “For services to the popularisation of science and broadcasting”. In the same year, he was appointed an honorary fellow of the royal society.

© Arfon Jones 2010. All images are copyrighted throughout the world.
Posted by Arfon Jones at 2:13 pm No comments: