Waltz on the Wye 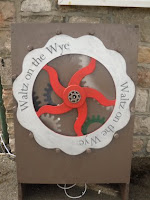 This month I had the privilege of being invited to Waltz on the Wye, Wales’ first Steampunk/ Neo Victorian Weekender/Festival. Based in the beautiful medieval town of Chepstow, located on the River Wye on the England/Wales border. It promised an opportunity to gather as a community, dress up to the nines and have great fun! I had never been to Chepstow so I was really looking forward to this. On the Friday night everyone gathered on the Riverside Gardens alongside the Wye where live music was provided on the Victorian themed bandstand cutesy of Ellethia and band Pocketwatch.
Conveniently placed next to the bandstand were the Strumpets with Crumpets who were on hand to provide delicious crumpets and hot tea. Once we had wiped the jam from our chins we made our way to the Drill Hall for a magic lantern show courtesy of The Travelling Light Magic Lantern Company! We all watched in wonder, as the itinerant projectionists shared his collection of authentic Victorian/Edwardian slides many of which were hand painted and capable of movement each one accompanied by live music and performance it was a truly amazing show. 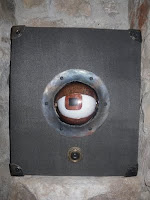 Saturday, having donned my new lab coat we made our way Chepstow castle as my collection of shrunken, frozen dinosaurs were required once more for the event’s contraption exhibition. With the ‘Cellular Condenser Ray’, ‘The Glaciation Ray’ and ‘The Patented Cryo-preservation Curiosity Cabinet’ on display I was able to explore the amazing of array of contraptions on display. The first exhibit was the brilliant Jarkman’s ‘The Eyes! The Eyes!’ a single mechanical eye contained within a box that followed anyone its eye line delighting the crowds stopping only for the occasionally blink! Then there was Roseanne Wakely’s gorgeous, fully working street organ, with a beautiful peacock adorned the front. When Roseanne gave a demonstration of the organ i 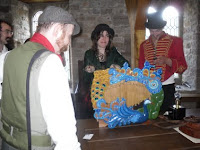 t drew hordes of people into the room to investigate further, along with the organ Roseanne’s steampunk kaleidoscope was on display as was her 1:25 Scale model of a submarine. Illuminating the contraptions was organiser Andy Dingley’s Pufferfish lamp which both horrified and entertained visitors. It was nice to see the nixie clock and rocket pack again. 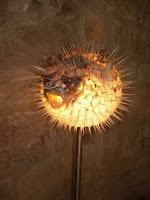 Andy’s perpetual mobile stopped many in their tracks eager to unlock the secrets of its perpetual spinning!James Richardson-Brown’s contraptions graced the windowsill, sitting proudly amongst his fine works was K-1909 a steampunk variant on the Doctor’s faithful robotic companion that appealed to visitors old and new.Last but not least was Matt McCall’s beautiful display of contraptions and inventions, the corner they occupied was often frequented by steampunks eager to acquire his beautifully made devices! There was an amazing atmosphere in the contraption room as steampunks and the general public (visiting the castle with no knowledge of what steampunk was) weaving their way around the room. I was pleased to see them take an interest and 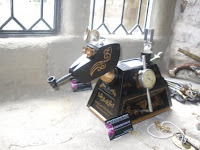 discussing the pieces checking to see if the ice was real, at times a gust of wind would cause the fog to rise from the cabinet, which added an extra thrill to people observing it at the time.

The contraption contest was a public vote, visitors were encouraged to vote for their favourite device the winner was James Richardson-Brown’s K-1909. The dinosaurs came second with Roseanne Wakely’s organ coming third. After the contest was over I was given one of the voting slips by the organisers which I was absolutely delighted with. It was a delightful exhibition I was honoured to be amongst such creative people some of whom I was able to catch up with at the Waltz on the Wye Cabaret and Ball that evening. 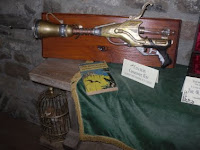 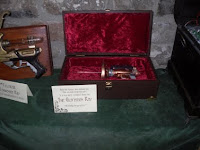 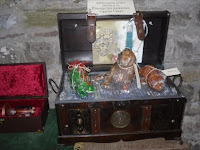 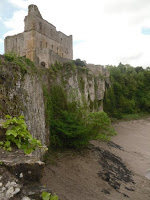 Compere Miss Lily Belle introduced the crowd to a the musical talents of Jarmean?, The Great Dandini, Matt Pang and Pink Kitten Dance School Can Can Troupe with burlesque performance by Velveteen Hussy and Lily Belle herself rounded off by Rogora Khart played out the evening. It is no wonder that the following day we decided to take it easy! After an early lunch we explored the castle and the town’s museum followed by a walk along the Wye it was impossible to not admire something along the way! After another visit to Strumpets with Crumpets and once again wiping the jam from our chins we made our way to the Drill Hall to look around the Mechanised Market! 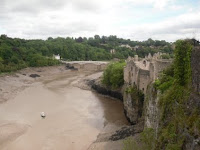 It was impossible to not admire the fine craftsmanship on offer, every stall lovingly decorated with attention to detail. After a sampling some of the products available on Prof. T Bottom’s stall and finally settling on a bottle of Wenches Mead the raffle was announced… imagine my joy on winning a crossbow and a of carpet bowls! We had a fantastic time in Chepstow, we met a great many interesting and creative people and saw wondrous things and we thank the organisers Rachel and Andy for a fantastic weekend, see you all next year perhaps?

Incidentally, Crinoline Robot has a far better written review with much nicer photos taken by Peter Gettins here
© Arfon Jones 2011. All images are copyrighted throughout the world.
Posted by Arfon Jones at 9:14 pm