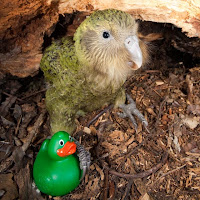 Scout Ducks continue to report in from across the globe each one with a wonderful tale to tell but I simply had to tell you about Scout Duck: 019 who reported in yesterday from Codfish Island, New Zealand. Apart from holding the record for being the furthest travelled scout duck his location is also rather amazing as he reported back from the New Zealand’s Kakapo Program!
The Kakapo also known as the owl parrot, is a large, flightless nocturnal parrot or as Douglas Adams once described “'the world's largest, fattest and least-able-to-fly parrot”. Native only to New Zealand and listed as a critically endangered species (at the time of writing this there are only 131 known to be in existence) it truly is a remarkable bird. Its not only the heaviest parrot in the world it’s also believed to have a life expectancy of 90 years! When the continents shifted and New Zealand broke off, their habitat had no mammalian predators, this resulted in the Kakapo loosing its ability to fly. When humans arrived on the islands centuries later they took advantage of this bird’s inability to escape, harvesting the birds. They also introduced predators such as cats, rats and stoats to the island worsening the situation for the ground nesting Kakapo who was almost wiped out. Despite conservation efforts made in the ninetieth century, numbers continued to dwindle, then in 1989 the Kakapo Recovery Plan was implemented. All surviving Kakapo were transferred to two predator-free islands, Codfish and Anchor where the bird’s breeding is closely monitored by a group of scientists, rangers and volunteers, tirelessly safeguarding the remaining 131 Kakapo in the world. 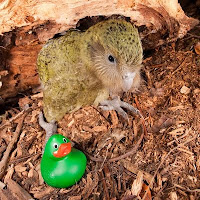 I commend their efforts in preserving this magnificent species, wishing them every success in their conservation work and thank them for taking part in this venture by homing, scout duck 019.
To find out more about the Kakapo and the conservation work please visit their site or make a donation towards Kakapo recovery programme.

© Arfon Jones 2010. All images are copyrighted throughout the world.
Posted by Arfon Jones at 8:26 pm