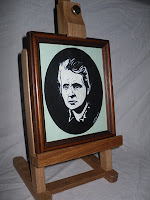 This would have been Marie Curie’s 144th Birthday. A pioneer in field of radioactivity she discovered the elements, Polonium and Radium. She received two Nobel Prizes and conducted the world's first studies into the treatment of neoplasms using radioactive isotopes later founding the Curie Institute a research centre specialising in the treatment of cancer.
So I thought I would use this day to share one of my latest pieces with you. Inspired by the story that a beaker glowing brightly in the dark lead to her to the discovery of Polonium and Radium I painted this portrait that both harks back to my ‘Science Spotlight’ series and glows in the dark!
Once the light is switched off the portrait lights up, the piece can be enjoyed during night and day and be useful if placed near a light switch as it remains bright for several hours making it easy to locate the light switch again. The first of my up and coming series of ‘Gamma Portraits’”

© Arfon Jones 2011. All images are copyrighted throughout the world.
Posted by Arfon Jones at 7:07 pm